We are all aware that Lesotho is preparing for its elections, which will take place on October 7, 2022.

And a man shared a poster of one of the putative candidates for office on Twitter, but the image was not what many were expecting.

As we can see on the post below, a Chinese person by the name of “Z.Shao” who appears to be departing from ” Ha Tsolo ” in Lesotho War 35 is running in the elections. We can also see a car with his poster on the number plate and a bakkie filled with his supporters.

The fact that Mr. Z.Shao has a different skin tone and ethnicity is undeniable, but that doesn’t make him any less deserving of support because he might just be the change Lesotho needs for a better future.

Remember that African nations ruled by fellow black people have a history of corruption and rule-by-surfer. Probably a change in leadership would usher in some sort of change.

An individual by the user name of ” Sizwe sikaMuzi @ Sizwelo ” felt the need to share this sight with the people on social media.

On the 13th of August 2022 around 9:29 PM , and captioned it ” Election season is underway in Lesotho Ntate Z.Shao in the running ”

Grabbing the attention of the masses at once , and so far managed to obtain a seazable amount of 549 retweets , 169 Qoute tweets and a whopping 959 likes.

The following content is supplied from twitter.com and here is the link :

Election season is underway in Lesotho. Ntate Z. Shao in the running pic.twitter.com/CCZVvBcIdV 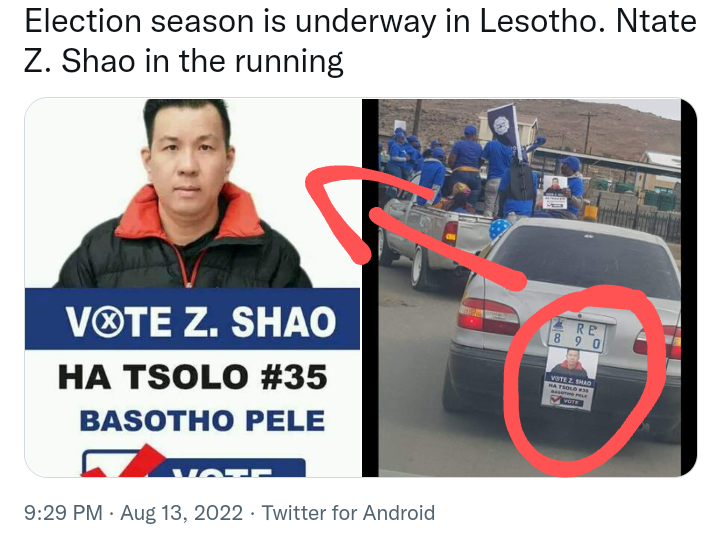