The latest support is the installation of piped oxygen in Ward 1A and Pediatric Ward. The company has also installed a 10, 000 litres water tank and geyser at the Stroke Unit.

In the two projects, the company has spent money amounting to MK21.4 million. Out of the 21.4 million, over Mk4 million has gone towards support Stroke Unit with geyser and water tank base while Mk17 million went towards extension of oxygen piping in Ward 1A and Pediatric Ward.

“We received a request a request to support the Stroke Unit which was in dare need for a reliable water source and hot water which is always a requirement particularly to patients in the Unit.

“For oxygen piping, this was a unique request that was noted on the QECH lists of requirements. Upon further consultation with the hospital administration Old Mutual was informed that there is an already existing project to extend piping from an in-house Oxygen production unit to Wards 1A and the new pediatric ward which was then being used as COVID-19 wards,” said Punungwe.

According to Punungwe, the hospital had no funding hence the company moved in after a recommendation. 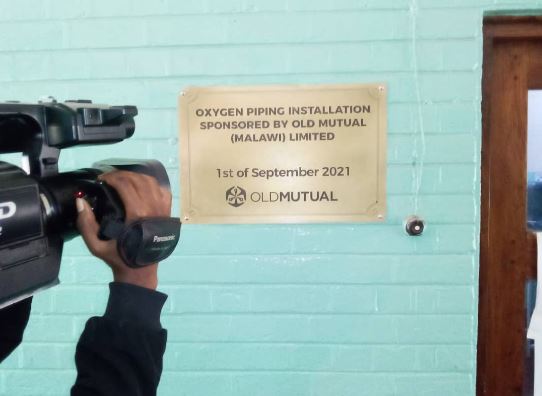 “The project involved installation of medical grade pipelines which are providing 28 additional Oxygen and 16 Vacuum outlets to the ward.

“This project is sustainable and long-term in a nature as it is minimizing QECH’s financial pressure to procure oxygen from private suppliers and provide uninterrupted supply which is key for organizations such as QECH,” added Punungwe.

“During the outbreak of COVID-19 pandemic in 2019, the hospital needed a lot of oxygen to support the patients and we were lucky a partner came and donated an oxygen plant which meant that we were no longer using cylinders, we needed to have oxygen delivered directly to the patients.With that initial donation, we had done piping to the hospital but not to all units. The units that were missing were the Chidren’s ward and the Antenatal Ward.

“With the coming of the piping that Old Mutual donated it was a game changer because in all wards that have been piped, patients are assured of continuous supply of oxygen so that’s the big advantage we have now,” said Mndolo.

Mndolo has also hailed the newly installed water tank and he has since appealed to other well-wishers to emulate Old Mutual’s gesture.