Lady with the name Deborah Seyram Adablah has filed a suit against Ernest Kwasi Nimako, the Manager of First Atlantic Bank in Accra, Ghana.

Apparently, the lady is a side chick to the Manager and she has sued him for failing to fulfil promises made to her during their affair. She was promised an amount and other relieves but it was never given.

In the writ made available to GHPage, the lady avers that she entered into a private and intimate relationship with the manager.

This comes after he (the manager) had persistently harassed her and abused her sexually. She gave in cos the manager wielded the power she gave in.

At the bank (First Atlantic Bank), where she used to work senior male officers persistently sexually harassed the female workers of the bank.

According to the writ of summon, if any female staff refuses to give in to the demands of the senior male staff, your life at the bank will be made unhappy and uncomfortable.

Again, almost all the senior managers have a girlfriend in the bank and they change the ladies at their will.

They also pimp the ladies to make advances to the rich customers with the view to sleeping with them and getting them to open accounts with the bank to the detriment of the female staff.

The lady, in the writ, reveals that against the background of the persistent sexual harassment and abuse by the manager on her, she was pushed to reach out to male customers to bait them with sex in exchange for opening accounts with the bank. 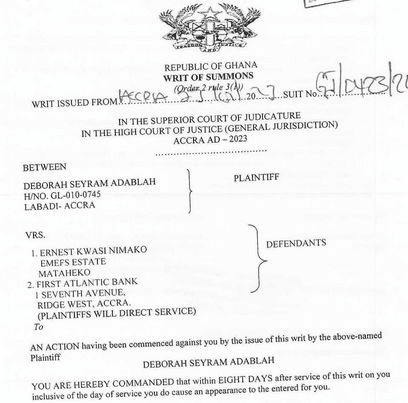