SA – A toddler witnessed his father stab his mother several times and hacking her to death before hanging himself. 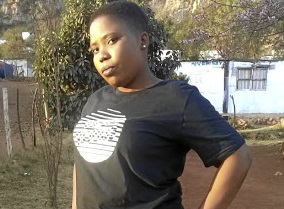 The three-year-old boy witnessed the incident in their home in Mamelodi, east of Pretoria, on Friday last.

Tebatso Mmatla, 23, was found by neighbours lying in a pool of blood with nine stab wounds, with the father of her children Gabise Manyaka, 32, hanging from a rope tied to the roof of their spaza shop in Stoffel Park informal settlement.

Yesterday, Tebatso’s mother Lydia Mmatla, 45, described the incident as painful. Mmatla was called to the scene and witnessed her daughter taking her last breath.

Mmatla, who lives just a stone’s throw away from the incident scene, said she rushed to the spaza shop after receiving a call from her 15-year old son who had been alerted to the incident.

“I rushed to the scene… upon my arrival I found a crowd at the tuck shop. I saw my daughter in a pool of blood, with her legs kicking, I grabbed her leg trying to talk to her, her eyes were rolling.”

She said her daughter asked her to call an ambulance. “I waited from 2pm to 5pm for police to arrive. I cried, pleading for people to find a motorist to rush her to hospital.”

By the time the cops arrived, it was too little too late.

Mmatla said the incident happened after Manyaka had visited his children at a place where her daughter had moved to after the two had fought. They then started arguing.

Manyaka was allegedly trying to convince Tebatso to return with him to their shack and assist him in running their spaza shop. “Gabise grabbed Tebatso and forced her to go back to their shack. When they arrived, the argument spiralled out of control.

“I have tried my best to bring peace among the two… my daughter was trapped in an abusive relationship with a man who used to assault her.”

She described Manyaka as a playboy. “He didn’t want to change his cheating behaviour, and that didn’t go down well with my daughter who ended up moving out.”

According to the couple’s friend and neighbour Katlego Maseogane, 29, who also witnessed the couple’s last fight, Tebatso and Manyaka had a turbulent relationship.

He described Manyaka as a person who often kept to himself and was very passionate about his spaza shop business, which he had built from scratch with Tebatso.

Mamelodi police spokesperson Const Lethabo Mashiloane confirmed that a woman was found lying in a pool of blood with a knife and an axe next to her and her boyfriend hanging from their shack.

The couple is survived by two children aged five and three.