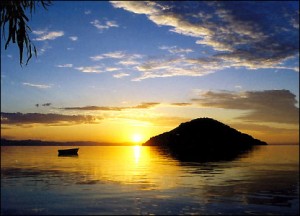 Anyone who has lived in Malawi (the old British Protectorate of Nyasaland) knows there is something very special about the place that grows on you and eventually enfolds you in its warm, friendly grasp. You can’t put your finger on it; it’s just there, ethereal. But whatever it is, it certainly captured my little family for 16 years. Without doubt, they are some of the happiest years of our lives.

It is a beautiful country, one third of its area covered in water. From the low lake the ground climbs to the lovely grassy hills of the Nyika plateau and on up to the steep mountains of Zomba and Mulanje. Swimming in the fresh-water lake is like plunging into a warm, tropical fish tank with myriad, flickering, multi-coloured cichlids. But in some areas, a watchful eye must be kept wide open for crocodiles (known colloquially as ‘flat dogs’) and hippos (‘mvu’ in Chichewa, the local language). Lake Malawi is called the Calendar Lake, 365 miles long and 52 miles wide, and is the deepest in the Rift Valley.

What attracted me to the country, amongst many other things, was its history. I was fascinated by all the old Victorian Christian missionaries who came to spread the Word, over 150 years ago. David Livingstone was the first of this courageous group of individuals. His ‘Missionary Travels’ opened up vast areas of Africa, including what is now Malawi, and his spirit remains there to the present day. Five crosses mark the graves of later missionaries at the old Livingstonia Mission on the southern shores of the lake, at Cape Maclear. They bear testimony to the evangelical zeal of the owners of the old bones now lying interred. These missionaries faced hardships unimaginable. Anopheles mosquitoes claimed them; mass murderers, serial killers. Dr Livingstone’s wife Mary succumbed to them and she is buried under a baobab tree in an untended grave on the banks of the Zambesi river. Bishop Mackenzie, that tall, handsome, athletic man of God, died on an island near the confluence of the Shire and Ruo rivers, ravaged by the parasites.

Other missionaries, survivors of malaria, were Chauncy Maples and Will Johnson. They were two remarkable spreaders of the Gospel who had been at Oxford University together and their combined efforts lead to the building of the famous Anglican cathedral on Likoma Island in the lake. Johnson was the ‘apostle’ of the lake shore, which was his parish for over 40 years, striding about, thin in his long white robes. But if Johnson owned the shores, Maples certainly owned the waters. He was drowned in them when his boat sank during one of those sudden, vicious storms which characterize the lake. His cassock dragged him under. The ‘Lake of Stars’, as Livingstone described it, is a very moody, often dangerous stretch of inland waters…particularly when the south east ‘mwera’ wind blows. The spirit of another missionary, Dr Laws, still ‘walks’ in the cool shadows at the old ‘stone house’ where a new Livingstonia Mission was relocated on a high plateau overlooking the lake. This was far above the pestilential vapours on the lake shore which Dr Laws believed were responsible for the deadly fevers. Malaria permeates the history of Malawi and, just like the slave trade, it decimated the population.

At Nkhotakota, the old Arab slave emporium on the lake shore, a sense of evil pervades to this day. From here thousands and thousands of captives were sent by dhow across the lake and then yoked together and herded down to the coast on the Indian Ocean, driven by the cruelty of the ‘ruga ruga’ (wild, painted, semi-human beings, carrying lashes). This was followed by a suffocating voyage by boat across the sea to Zanzibar, the central slave market for the Arab world and the East. Only about a quarter of the slaves survived this journey to hell. Fierce battles occurred to stop this beastly practice in the Karonga area of Malawi, spearheaded by British colonials: Sir Harry Johnston, the Moir brothers, Frederick Lugard and Monteith Fotherington. These wars raged for years, largely unnoticed by an outside world preoccupied with other wars of the late 19th century. Finally the infamous Arab trader Mlosi was defeated and hanged at Karonga, marking the end of slavery in the region. But it was Livingstone who had first exposed the horrors of it all. This, and his journeys of exploration form his lasting legacy. He died a lonely death in what is modern day Zambia, on his knees by his rough bedside, plagued by dysentery and bleeding haemorrhoids. Faithful African followers carried his embalmed body many hundreds of miles down to the coast from where it reached its final resting place in Westminster Abbey. His heart, however, remains in the soil of Africa which he loved.

Out of Malawi come other fascinating stories; like the famous account of Commander Rhoades who initiated the first naval engagement of the First World War. He pummeled the gunship Hermon von Wissmann while it was in dry dock at Sphinxhaven on the eastern shores of the lake with a salvo from a 6 pounder Hotchkiss on his gunship Gwendolyn. Rhoades had been wining and dining a short while before with his old friend the German gunship commander who was oblivious to the outbreak of war, so the apoplectic rage of Herr Brent echoed through the smoke and fire across the waters with, “gott for damn Rhoades, ist you dronk?”

It was my great pleasure to visit many of these places I have mentioned and to muse on the lives of the great characters. As a company pilot, I got to know the surrounding territories fairly well in the years between 1991 and 2008. My fascination for Livingstone spilled over into Tanzania where I explored the old house at Unyanyembe, (modern Tabora) the house where Livingstone and Stanley parted company in 1872. Stanley headed home to England to bask in the fame of his famous newspaper report, while Livingstone wandered off in search of the illusive source of the river Nile. He was never again seen alive by another white man and within a year he was dead. I viewed precious pieces of Livingstone memorabilia at the museum in the Zambian town which carries his name. And I visited the museum in Blantyre, Malawi, named after his birth place. And I stared in morbid fascination at the tools of the slave trade, leg irons and wooden neck yokes, on display at the Bagamoyo museum on the Indian Ocean shore. This was the final staging post for slaves from the hinterland to Zanzibar.

History came to life for me in my travels. Old German coins, with the eagle emblazoned, could be bought from youngsters on the beach at Bagomoyo, the old capital of German East Africa. And KAR (Kings African Rifles) medals and old brass trinkets from ancient Arabia could be found in the crowded bazaars of Zanzibar. The Selous game reserve, named after the famous hunter who was killed there by a German sniper in WW1, was awesome in its vastness and diversity of wild life. I traced Commander Paul Von Lettow-Vorbeck’s travels with his askaris around this area and down across the Rovuma and Lugenda rivers into Mozambique. I wondered at the man’s audacity and skills in conducting running, guerrilla warfare against the British forces in East Africa during the First World War. He was never caught and eventually surrendered at Abercorn in Northern Rhodesia( Zambia) at Armistice.

Mount Kilimanjaro, Victoria Falls, Zimbabwe ruins, chimpanzees in Uganda, Caborabasa dam and the Zambesi and Chobe rivers, circling the volcano on the Comores Islands and catching sail fish and dorado off Malindi on the Kenyan coast are deeply embedded memories. And so too are the memories of formation-flying with vultures in a glider over Wankie game reserve, tracking wild dogs near the Gwaai River lodge (now raised to the ground), collecting spices and old books in Dar-es-Salaam. I chased the ghost of Beryl Markham (that famous aviatrix) at the Muthaiga Club in Nairobi where she lived and at the Wings Club of East Africa which she frequented. The stories of ‘White Mischief ‘ and the Ngong hills intrigued me and the mysterious unsolved murder of the Earl of Erroll in Nairobi and Van der Post’s ‘Ventures to the Interior’ on the Nyika plateau. Ruins of the Flying Boat base can still be found at Cape Maclear. These BOAC ‘boats’ landed there in 1949, en route from England to the Vaal dam in South Africa. In the nearby bush ‘Guru wan kulus’ still dance around the night fires to the beat of throbbing drums. ‘Guru’ are secret-society male initiates who dress in weird, fiercesome guise and are frequently seen running along country roads in Malawi; scary things. Kids scatter at their approach and even adults scuttle away quickly.

Africa is a fascinating continent and Malawi is, for me, at it’s very heart. In fact, it is known as the “Warm Heart of Africa” and often I would reflect on this lovely description at sundowner time in the tropics. Sipping frosty Carlsberg beer (locally brewed) in the company of good friends, as the sun went down at Monkey Bay, was a perfect setting for reflection. Ask anyone who has been there. But, I never made it to the top of Mulanje Mountain, and that’s one big regret I have since leaving Malawi to live in Canada. So I have to go back one day to that Warm Heart.

William Stirling (Mitch) spent 40 years flying in central Africa. He writes about his travels and links his stories to an African past which is rich in tales of colourful old characters. It is history and geography and social science all in one.