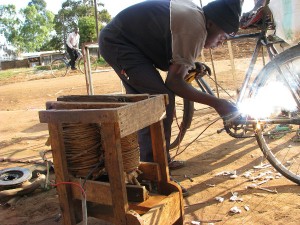 Next to an intersection with the main road to Mulanje works a group of men with basic tools. One of them was actively welding with a scratch built arc welder.

Wire was wrapped around a group of metal plates, and the whole thing was housed in a basic wooden frame.

To turn it on, the power wires to the transformer were connected hook style to the AC electric supply coming out of the store room.

There was one guy doing the welding, and he was also alternating between bashing away at a brake disk from a Toyota, trying to remove a part of the wheel hub. The banging was what originally caught my attention. He was beating away at it with a hunk of steel, fatiguing the metal of the hub for removal.

While I was there, he repaired two bikes, one by welding the pedal post back on to the crank.

While shooting the pictures of him welding, I protected my eyes by looking at the display of the camera and shielding my eyes by placing the camera in the line with the arc. The welder used no goggles. US safety inspectors would not have been pleased if they had been with me. I didn’t realize it until I looked at the photos afterwards, but his technique was to do ‘blind welding’ He would attach the ground to the bike, close his eyes, and scratch at the point he wanted to work with the electrode. When the current flowed and the electrode melted, he worked it until it was close, then would stop, open his eyes, check his work, and continue on or finish up.

Since most Malawians have little or no access to the energy of fossil fuels, people get around by either walking or using bicycles. These bikes are used for everything, carrying heavy loads, personal transportation and serving as taxis. They almost all have sturdy steel racks on the back. The bikes are made in China or India, Humber was a common brand name.

If you lived a life with very little access to the leverage of fossil fuels, like the people of Malawi and many other countries, how would you get things done? Have you seen or done a project like this? how could access to a tool like this change a person’s or a community’s possibilities? What are your safety procedures for welding? Contribute to the discussion in the comments and add your photos and videos to the Make Flickr pool.