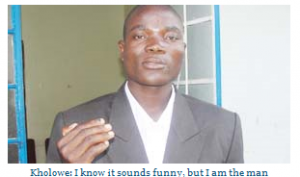 Coming all the way from Phalombe in southern Malawi was 26-year-old Maxwell Kholowe, who claims to be Jesus Christ, the man the Christian community believes to be the son of God.

Dressed in a black stripped double button suit , with slippers and looking very confident, Maxwell could not hold back his message, but tell it like he believes it.

“The man the scriptures say on Micah 5 verses 2 was me, I am the one. I am Jesus Christ,” he claims.

Christians believe that Micah 5:2 is one of the clearest indicators given in the Hebrew Scriptures for identifying the Messiah, a prophecy which both pinpoints the exact birth location of the Messiah, as well as telling us much about the character and power of this Anointed One, Jesus Christ.

Furthermore, the scripture mentions Bethlehem as the place the anointed is to come from but Maxwell says people do not understand the words as they were written in a parable form, the place Bethlehem in this time is where he comes from—Phalombe.

“I know it sounds funny, but I am the man, and since I come from Phalombe, in the Bible this place is called Bethlehem,” he said sternly.

Despite that Maxwell was born over 26 years ago, he claims to only have discovered his status on the 8th of March 2011. He said on this day, he was taken to two places—hell and heaven. He claims he first visited hell where he heard a voice saying, ‘this is the place where all the devil’s advocates will go.’

Later on, he claims to have been taken to heaven, where he was anointed as king of kings.

“When I was half way through to heaven, angels came and cleansed me and I was pronounced clean and pure, ready to see heaven. When I arrived there, I saw about 24 angels and four other creatures praising and worshipping God. I stayed there for three days and on the third day, I was told to go and preach the Word of God, but when I came back, people did not welcome me and instead I was taken to a mental hospital.

“I had to be cleansed to avoid being killed as we all know that the first Jesus was killed and I was also told that I would live a thousand years, both my wife and I. However, my son was just given special powers,” he said

When asked why he is married, Maxwell said both he and his wife were the chosen ones and that was not a problem.

Maxwell, who kept referring to the Bible for scriptures, said when he was at the mental hospital, it was like he was dead, and in the grave.

“While at the mental hospital, my spirit also went to preach to the people who had died a long time ago and have now been raised by God, through me, of course,” he said.

Though he failed to provide concrete evidence of his resurrection from death, as Christians believe Jesus did, Maxwell, who was once a tailor, said he is the son of God and that all those who don’t repent will perish