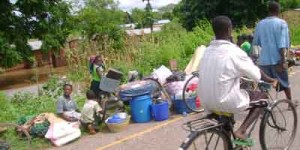 There are a number of achievements within the past three months which we are proud of; as you know, we are just new partners –  but our link with Safe World for Women makes us proud.

And to us, this is a great achievement –  and within the period, we made a number of partners. Just to mention a few: we are a partner with Volkat Vision, CRW ev Berlin, Social Scientists without Borders, and many other more organizations around the world.

As the organisation  is very much focused on the welfare of the women, we have in the past few months managed to establish the Chididi Women Groups Savings and Capital Building Project, which is a powerful project aiming at eliminating poverty –  the great barrier for women to participate effectively in various development projects within their families, as well as outside their family, which is within the society.

I have seen the life of a woman changing, with the little resources she has contributed to her group within the short period of time, and imagine where she will be in the next few years as narrated by the women.

We have also managed to raise $26,300.00 which is aiming at enhancing change to Chididi Women Groups through capacity building and I thank Volkat Vision for the grant.

Within the past three months we have managed to pay school fees for 11 vulnerable students under the Harry Singh Scholarship, with the support from Harry, our partner from the USA.

As a newly established organisation, we are proud of the opening up of the first office of SURCOD in Nsanje  since at  first we were operating from a house of the executive  director.

A Glimpse of Life in Chididi

Although the above are the good side, there is also a bad side for it being mountainous.

All these [foods] are sold down the nearest market centres. Commuters hardly accept going up the mountain because of its ugly shape.  Therefore, all the given blessings are carried on foot to the market.

Much of the carrying is done by women and children. During fruit season, most children are often seen carrying these tradeable loads that they appear as if they are going to school.

Chididi has a small private clinic that is run by a church. The highest profession at this clinic is the midwifery nurse. The pharmacy is manned by a locally-trained long time employee.

This church came to Chididi around the 1800’s, where they built a primary school and a church.

The school was the only institution that was giving high education in the years between the 1950’s and 1960. It was a boarding school offering Standard 6 class. This standard gradually died after a considerable long stay because the then-government was constructing more public primary schools.

Because of other internal wrangles, the church projects ceased to grow.

However, their coming was a really blessing to the people of Chididi; otherwise without them, I do not know what Chididi would look like.