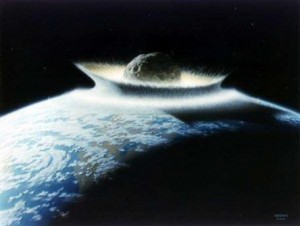 We’ve been hearing all this chatter about how the world will end on May 21st.

And as May 21st approaches, and the volume of chatter increases, we’ve gotten curious: How, exactly, is the world going to end?

New York magazine interviewed one of the folks who says the world is going to end. And unlike most prophets of doom, he’s actually quite specific:

[W]hen we get to May 21 on the calendar in any city or country in the world, and the clock says about — this is based on other verses in the Bible — when the clock says about 6 p.m., there’s going to be this tremendous earthquake that’s going to make the last earthquake in Japan seem like nothing in comparison. And the whole world will be alerted that Judgment Day has begun. And then it will follow the sun around for 24 hours. As each area of the world gets to that point of 6 p.m. on May 21, then it will happen there, and until it happens, the rest of the world will be standing far off and witnessing the horrible thing that is happening.

Now, some folks have already raised the question about Daylight Savings, etc., but we assume God has long since figured that one out. And some other folks think that May 21st is actually just going to be “The Rapture” and that the world’s actually going to end in October.

But we’ll worry about that later.

For now, we’ll just start the clock running. Check in for the latest time left at the link below. Less than 24 Hours and counting!