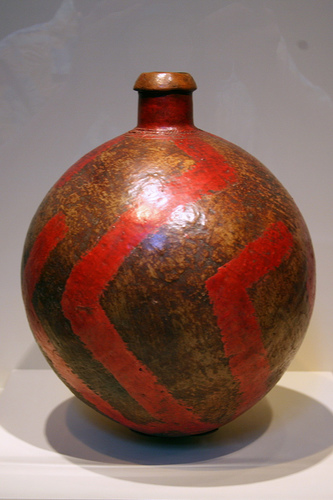 Image by cliff1066™
African potters–primarily women–handbuild a variety of vessels that they embellish with beautiful colors, designs and motifs before firing them at low temperatures. Containers made for daily use hold water or serve as cooking utensils. They also make vessels to be used in special ceremonies or that become part of an assemblage of objects placed in a shrine. The brilliant red, bold zigzag motif was probably rendered with imported paint and applied to the body after firing. The surface was covered with wax to enhance the natural color of the clay. The paint and wax may have been applied to the bottle by someone other than the potter. 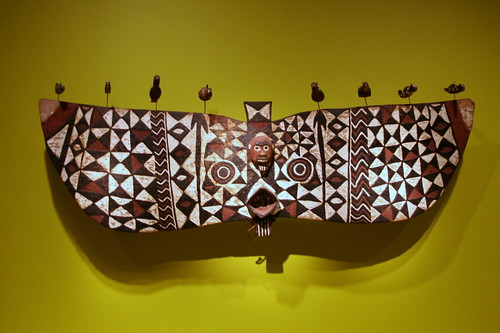 Image by cliff1066™
This mask depicts a butterfly, one of a cast of masquerade characters, and represents a bush spirit. Because butterflies signal the coming of rain, they are connected with the start of the farming season. The plank mask’s broad, richly patterned wings and the small birds and chameleons inserted into the upper edge are characteristic of Nuna masks. 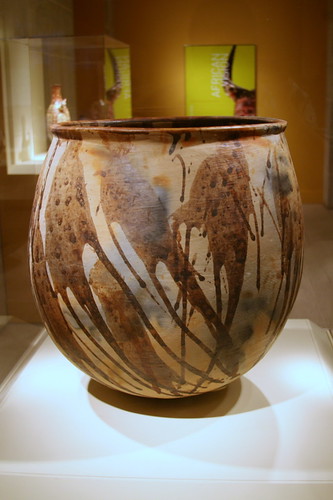 Image by cliff1066™
This large ovoid vessel was handbuilt by a Chewa woman and fired at a low temperature. The potter achieved the aesthetically vibrant surface by splashing a vegetable decoction on the body immediately after firing. The dark spots were caused by firing the jar in a kiln with reduced oxygen. Although the dark spots were unintentional, they add to the pot’s aesthetic effectiveness. These vessels are typical of pottery found throughout Africa that function as containers for foodstuffs. Chewa women keep such vessels near the cooking area and used them to store locally brewed maize beer (kuchasu). Kuchasu is consumed before traditional ceremonies of the Gule Wamkulu (Great Dance), which is performed at funerals and initiations.