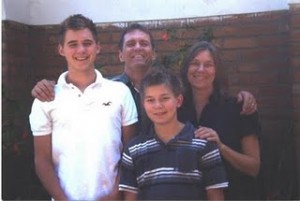 Sunday, 12th June, 2011 was a special day at St Michael and All Angels Church. Rev Eddie Hoekstra, who had been the congregation’s Associate Pastor, bade farewell to the 4000 strong congregation as he rounded up his tour of duty to Malawi. Only one service was held on this Sunday morning, the meeting place being the Multipurpose Church Hall.

It has been said that each time we part we die a little. And indeed the occasion marked some dying of the congregants to the Hoekstras and, in turn, the Hoekstras to the individual members of the congregation. Until, of course, we meet again hopefully on this side of eternity or on the other side. From that perspective, it was a sad occasion.

From a different perspective it was a happy occasion because it afforded everybody the opportunity to reflect on the Hoeksras’ accomplishments since coming to St Miachel and All Angels. As the Moderator, Rev A Kamponda enthused, Eddie Hoekstra was a man full of “get up and go”. Each time the two pastors needed to go somewhere to discharge their pastoral duties, Eddie did not hesitate to hoist his bag and say, “Let us go, what are waiting for?”

The musical talent of the Hoeskra family was very much cherished by the musically minded congregants at St Michael and All Angels. Each time he preached, Eddie would slot in a special song either sung by himself or with the congregation. Mrs Hoekstra and the children were helping out with various musical instruments at the 5:00 pm service.

While in Malawi the Hoeskras adopted the clan name Phiri (Mountain). In the traditional Chewa society, the Phiri clan was the ruling elite, the nobility. Eddie Hoekstra and his family, therefore, found their place among the Malawian nobility.

Rev Hoekstra, originally from Canada, was at St Michael and All Angels Church for nine months, having previously served at Chigodi Centre and St. Columba Church.