Donna Ivey | Back in Malawi

June 26, 2011
Greetings from the beautiful country of Malawi, where the day temps are in the 70s and the nights in the 50s. We spent ~2 days getting here, but other than being long the flights were un-eventful We arrived to find the country in the midst of a fuel crisis. The filling stations are either closed (no fuel) or have hideously long lines. Rumor is that some people have been stopped in the line for days before they either got gas or were told is was ‘finished’. Fortunately, the car we have was full when we got it (a great blessing indeed). We are being very careful with the fuel use. It is unclear if this situation will improve; another rumor states it will get gradually worsen until Dec of this year. The reasons behind the crisis appear to be many – the country itself is strapped for funds, the country has no credit line with which to buy fuel, and not much forex (foreign exchange, i.e. outside cash) is coming in. If you think the recession in the US is bad, you have no idea!! Almost everything here is transported by truck – those trucks now sit in lines to get diesel. No products being transported. The rail system is poor and the shipping system is non-existent. Food prices, always high, have soared. A bag of dog food costs $48. Butter is $7 / pound. Any canned vegetable is at least $2.50 a can. Milk – $2.25 / liter. Most workers do not have any of their own transport except their feet, or, if they are lucky, a bicycle. They depend on the minibuses to get them to work and to the stores – those buses that now sit in fuel lines. Oh, and gas is $8 / gallon with black market prices upwards past $11 /gallon. The poor here are really suffering, and the ‘rich’ are not doing so well either. Pray for some relief for the fuel situation. 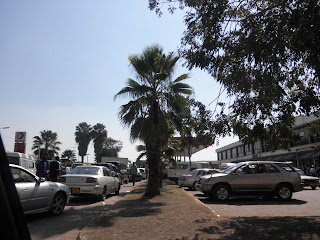 We hope to do some village clinics this coming week, but it all depends on if we get fuel. Many of the ministries have had to cut out their village clinics. The ABC clinic has an ambulance -with enough fuel right now to make one more emergency trip to the central government hospital, and NO fuel to get to the big orthopedic or Seventh Day Adventist hospital in Blantyre. A gentleman sits in our inpatient ward with a tibial fracture, hoping to find a friend with fuel to take him to Blantyre on Monday. The clinic generator has enough fuel to last 4 hours. If -or rather, when – the power goes out, we have 4 hours of light, labs, sonograms. Not to mention surgeries in the new OB wing. The fuel lines are creating traffic hazards, even more than usual, and the tempers appear to be flaring. Since the country is so short of funds, the police have been given quotas and told they must ‘make their own salary’. The car we have (actually ‘my car’) I loan to some missionaries while I am away. Oops, they forgot to check the license and the ‘certificate of fitness’, both of which expired. We were stopped last evening and told we were in violation. The fine was 12,000 Kwacha ($67) but Matt Moffett showed up (long story) and talked them down to 2,700 kwacha but we are grounded from driving the car until we get the certificates. That should happen Monday. The fine was paid, in cash, with no receipt, to the officers stopping us, as they all proclaim ‘we are not corrupt’. Oh, well, it was another Malawian experience. We are staying about ~1 mile from ABC and there was a dinner last night we wanted to attend, so we took off on foot, slightly before dark. Matt and Toni Moffett came by and saw us, offering us a ride. I am not sure if walking after dark is actually that dangerous, but they seemed to think so. I personally think Jose is tall enough and strong enough to deter most muggers. I did enjoy the ride, though!
The dinner was wonderful. One of the guys on ABC who works with a couple Malawians to do a Educate, Empower and Employ ministry (E3) has been having some interesting classes. He is David Epperson and his wife, Becky, is the OB nurse at the clinic. He has a cooks class, where he brings all the cooks on the campus to share their recipes or learn new ones, and invites the missionary wives to come, too. Anant Peacock is one of the theology professors at ABC and is Indian. He taught an Indian class yesterday and the results of the class were our ‘feast’. I love Indian food and this was the best!! And the desserts were heavenly, too, not to mention the fellowship with the ABC staff and getting to know new folks and catch up with old friends. David also does a permaculture gardening class, where he is teaching use of heirloom seeds, composting, organic techniques, restoring the soil, etc. I hope to see his main garden tomorrow. I brought him a large packet of heirloom seeds, but anyone interested in sending some seeds, contact me soon and we can get them in the bags of Michael or Katie who come later in the trip. The use of heirloom seeds and organic methods frees the small farmer from dependence on always buying his seeds, fertilizer and pesticides plus it gives better produce! It is a wonderful idea. I have found that the people making the biggest difference here seem to be the ones working one on one with the Nationals, understanding their needs, not depending on technology. Pray for these grass root efforts.
Enough for now! I am afraid the internet will be gone and I will lose this blog. More later. Our plans today are church at the Flood (we will have to have a ride there), lunch and then still settling in.
Thanks for all your prayers.
The pictures are simple, just from the gas lines. More interesting stuff to come! When you pull up to a gas station in the US, think of the Malawians and be thankful, so thankful, for what you have. Pray for these struggling folks. Pray for us!
Posted by Donna Ivey
(Visited 24 times, 1 visits today)
Previous articleBig Brother Africa Update : Getting Frisky With It!
Next articleI’m not threatened by young musicians, says Lucius