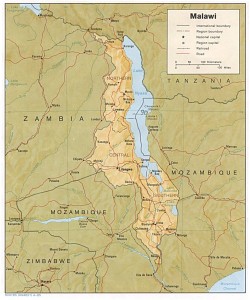 We have made it from Malawi to Mozambique with a bit of luck and a lot of dust. From Cape Maclear where we were in my last update we traveled relatively quickly and easily to Liwonde National park, home to lots of elephants. The journey began in the back of a truck holding on for dear life and ended much more pleasantly four hours later on the back of a bicycle taxi each with an extra one carrying our luggage. We stayed at a nice place called Bushmans Baobab, surrounded by Baobab trees where we spent our time eating and doing safaris. We did another canoe safari which was lovely, we were right at water level with hippos and waterbuck and lots of beautiful birds. We didn’t see elephants despite there being over 600 in the park but we had a very lovely time. The next day after our morning safari we got the bicycle taxis back into town to embark upon our journey into Mozambique.

We decided to pay for a private taxi to take us to the border which was definitely a good idea. A minitaxi would have taken hours and hours and the road had areas of deep sand. Also it was a tiny bit more comfortable especially for Dean. When we got dropped off at the border we had to walk through noman’s land with all of our luggage. We had heard horror stories about the Mozambique border so we were feeling a little nervous. After about 700 meters we came to a little hut with three guys in khaki sitting around. They were not immigration, that was still not in sight! They were really lovely and changed some USD for us because they did not trust they guys at the immigration post. They also taught us some basic Portuguese and helped us with how much we should pay for a bus to Cuamba, our destination for the evening. After we left them we walked for another kilometer and a half, past a village of thatched mud huts. A big four wheel drive went past us and we decided not to ask for a lift as we were sure it was only a little further. a couple of minutes later someone told us the border was closed and when we reached it it did appear that the immigration officer was away. Fortunately the guy with the 4×4 was also waiting for him to return because there were no buses whatsoever into town and there was nowhere at all for us to stay and wait for the morning bus. Even if there had of been we would have missed the train we hoped to catch and ended up in a big dusty town for an extra day. The driver knew the immigration officer and called him to the post. He then offered us a lift to Cuamba. It was the most comfortable journey of our trip so far! The shocks on the car actually worked and there was plenty of space and aircon! then he took us to the bank, the station and our hotel in Cuamba all before dark! We were incredibly lucky and it seems we were in the right place at the right time.

The next day we got the train at 5.30am. We had a second class ticket which meant we had lots of space and it turned out to be a very pleasant journey. It took 9 hours and we arrived in Nampula at 4.30. Our hotel, like the hotel in Cuamba, was overpriced and underwhelming. Neither had working showers or flushing toilets. There was nowhere to eat in either town and we were feeling very seedy and still unsure of how long it would take to get to Mozambique island, or how to get there. We couldn’t really get any solid information because no one speaks English! Again, we were very lucky, we seem to have accumulated some good travel karma. There are a number of different types of bus or transport that go to the island, some of which only go half or two thirds of the way or don’t go direct. Somehow we ended up on a very direct one which was reasonably unsquished, only 22 people in a 14 seater bus. And the driver did not overcharge us. Still the journey was hard and we were concerned about what accommodation would be like on the island. But we are staying in a beautiful old colonial building with a fantastic courtyard with bright flowers and a lovely pool and our room is large and light and airy with a nice bed and a private bathroom. We have also been for lunch and are delighted to report that the food was marvelous! We plan on staying here for a while and recuperating, traveling is exhausting and we have done a LOT of traveling. The hard parts are nearly at an end though and it is fantastically rewarding when we arrive somewhere beautiful like this!