Change Of Demonstration Route For BT, Plus Demos Now To Cover Whole Malawi

July 15, 2011
“Dear Readers, Note That Blantyre Route Has Changed”
On The 20th July, 2011 National Peaceful Demonstrations
This is to inform all Malawians and various stakeholders that we members of the  Civil Society and concerned citizens have organised peaceful demonstrations to take place on 20th July 2011 in all the four regions namely: Southern, Eastern, Central and Northern Regions and all Districts from Nsanje to Chitipa.
The peaceful demonstrations have been organized as part of our constitutional right to express alarm regarding the current economic and democratic crises facing Malawi, with the aim of calling for an end to the current poor economic and democratic governance being advanced by the current administration.
The Theme of the Demonstrations is:  Uniting For Peaceful Resistance Against Bad Economic and Democratic Governance – “A Better Malawi Is Possible”
Outline of the Demonstrations is as Follows:-
Southern Region
Starting point: – Start from the Clock Tower in Blantyre thence to the Blantyre District Commissioner’s Office to deliver a petition to the DC and ending at the gates of Sanjika Palace where another petition would be delivered for the attention of the State President.
We are calling all Malawians from Ndirande, Chilomoni, Chilobwe, Bangwe, Zingwangwa,Machinjiri, Mbayani, Chileka, Ludzu, all areas and locations to join the demonstration on 20th July.
Central Region
Starting Point: – From Community Centre Ground through Old Town then Kasungu Highway then to City Centre where speeches will be made.
We are calling all Malawians from Area 25, Kawale, Biwi, Mchesi, Chinsapo, Area 23, 33, 49, 39, Bunda, Likuni,Mugona ,all  Areas and Locations to join the demonstration on 20th July.
Northern Region
Starting Point: – From Katoto Ground through Town to City Assembly Office where a Petition will be presented.
We are also calling on all Malawians from Zolo Zolo, Katawa, Chiwanja, Mzilawayingwe, Chasefu , all Areas and Locations  to join the demonstration on 20thJuly.
District Demonstrations: – Malawians demonstrating in districts we appeal to you to convene at one place and March to the Office of the District Commisioner to present a Petition.
Colour: – We are appealing to all Malawians to put on anything RED on 20th July wherever they are for this peaceful demonstration.
If you cannot join and you are a Chief Executive,  Managing Director,  or any other Officer , or working in the Police, Army, and if you are a Civil Servant please release your house servant/gardener on this day of 20th July.
Note:  This is a peaceful demonstration and we would appeal to all Malawians to be DISCIPLINED during these national wide demonstrations.   Lets us show the authorities that much as they are oppressing and victimizing us we are peaceful andresponsible Citizens.
This is your chance to make the difference by being heard and be counted on 20thJuly.
Lastly we sincerely thank the Business Community, Government Officials, Democratic Peoples Party Officials, the Police, Army, City, Local and District Assemblies for the support and understanding   and we look forward to successful and peaceful demonstrations.
COME ONE!  COME ALL!
“A BETTER MALAWI IS POSSIBLE:”
VIVA DEMOCRACY!
VIVA STRUGGLE AGAINST OPPRESSION AND DICTATORSHIP  ! 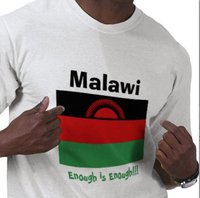