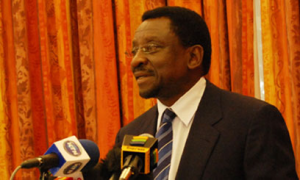 Controversy over a Cabinet decision to allow the importation of Genetically Modified (GMO) maize has deepened, with James Orengo taking sides with Public Health Minister Beth Mugo in opposing the move.

The Lands Minister said the resolution was not reached in the Cabinet meeting he attended last week.

“The decision to bring into the country GMO maize is not a government undertaking,” Mr Orengo said on Monday contradicting a Thursday statement from State House Nairobi, which indicated the Cabinet had resolved to authorise millers to import GMO’s.

The GMO maize that will be produced into flour is expected in the country to help ease the hunger situation.

“The Cabinet agreed that only millers will be allowed to import GMO maize. That GMO maize must be for production into flour,” last week’s Presidential Press Service statement read in part.

“No GMO maize should be used as seeds under any circumstances,” the statement added.

However Mr Orengo alleged that the planned importation could be a plan by certain individuals and grain cartels that did not care about the consequences and the risks of endangering the lives of Kenyans.

The Minister explained that he attended the Cabinet meeting which supposedly made the decision but the issue of GMO maize was never discussed or passed.

Speaking in his Ugenya constituency, he said he was only aware of a Cabinet sub-committee established to look into the issue of escalating maize prices with a view to bringing it down.

He admitted that the government was feeling the effects of the high maize prices but GMO maize could not be used as an alternative to finding a solution towards maize shortages.

The minister appealed to local farmers to double their efforts towards production of maize and other food commodities so that the country may not rely on importation of grain and other food stuff.

The Cabinet, which is the government’s highest decision making organ, is reported to have made the decision to import GMO maize on Thursday with strict guidelines that it must be certified by the National Biodiversity Authority.

However Public Health Minister Beth Mugo has maintained that GMO’s should not be allowed into the country, saying that the country needed to first exhaust the organic produce in countries like Malawi, Zambia and Tanzania.

“My interest is that any food consumed must be safe for Kenyans,” she said.