DELETING KAMUZU FROM THE HISTORY OF MALAWI | PETER QEKO JERE 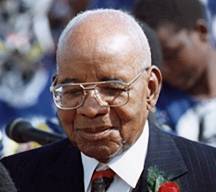 Weeks ago an article appeared on the Nyasatimes where the author advocated the Anti Kamuzu Banda sentiments where he proposed that Kamuzu must die from Malawi’s history and that celebrating him is tantamount to Satanism. I have been going through this article trying to understand why someone could be so crude and share such piece of anger to the public. I also have been wondering as to whether education the author is pursuing at Polytechnic is helping him to become more productive in nation building as a journalist. In a normal situation we expect those of us pursuing some University studies to be more enlightened on issues and effectively contribute to debate with soberness and statesmanship. In this article my main argument is that in as much as the author would have loved to see Kamuzu Banda’s history deleted from Malawi’s history, the truth of the matter is that Kamuzu Banda’s historical account will remain part of Malawi’s history for as long as Malawi exists as a nation. Kamuzu Banda ruled Malawi for more than 30 years and almost half of the country’s population were born and grew up during his reign. However before I present my case, I would like to correct two misrepresentation of historical facts the author raised in his article as he argued his case against Kamuzu Banda;

The launch of the 1953 struggle against federation: To begin with, the author presents a huge misrepresentation of historical facts on the launch of the Federation of Rhodesia and Nyasaland in 1953. The author argues that the four young Turks; Chipembere, Dunduzu Chisiza, Kanyama Chiume and Orton Chirwa launched the 1953 struggle against the Federation. This is a misrepresentation of historical facts because by 1953 these young Turks were not in Malawi but were abroad pursuing their various studies. For instance Chipembere and Orton Chirwa were at the University of Fort Hare pursuing their various degree studies together with the likes of Robert Mugabe, Julius Nyerere, Tom Mboya, Mongasuthu Buthelezi and Nelson Mandela. During the same time Kanyama Chiume and Dunduzi Chisiza were pursuing their studies in East Africa. Therefore to say that these four great sons of Malawi launched the 1953 struggle against the federation of Rhodesia and Nyasaland is the misrepresentation of historical fact in the study of the colonial history of Malawi. The noble sons of the land only joined the struggle when they came back from their various studies and this was after the launch of the federation.

The 1964 Cabinet crisis: In addition, the author somewhere in his article argues that the 1964 Cabinet Crisis was not a crisis but a mere event where the ministers wanted to check Kamuzu’s unjustifiably huge power. This is also a dangerous misrepresentation and a distortion of historical facts about this major political event in our history. The Cabinet Crisis was not just a mere worthless event but a real and a major shakeup in the political history of our country. The Cabinet Crisis is about the cabinet ministers being fired and some deciding to resign in sympathy with their sacked friends which basically paralysed the entire executive arms of government. The most dangerous part is that the author seems to undermine the significance of this major event in our political history which is unfortunate and sad. For those who saw and were present that time in September 1964, this event was a bomb that exploded and managed to shake every foundation of the Malawi’s political destiny because the key people involved were noblemen and women who were also freedom fighters together with Banda himself. Having said this, let me now show you why the history of Kamuzu Banda will remain part of Malawi’s social political and economic history for years to come.

Kamuzu is the Father and Founder of the Malawi nation: Firstly is that Kamuzu Banda remains the Father and Founder of the Malawi nation and this is the historical fact that will never be changed in our history books. We need to just accept that this is how things are and will be. Kamuzu Banda ruled the nation for more than 30 years and this is a huge history that cannot just be removed from the history books. Kamuzu raised the great foundation of this nation and as human beings we need to appreciate in as much as we know that there were instances where he failed. Removing Banda from the history of the nation is a say dream and it is like removing the very foundation of this nation. No true Malawi’s social political and economic history can be written without Kamuzu’s name being mentioned. Having said this, we need to know that as human beings we all have weaknesses and failures. It is historical true that bad things happened but that does not justify to deny the nation the piece of history which raised the very foundation of their existence as a nation and as a people. In life there are some historical facts that we cannot change just because we want to satisfy our ego. So in as much as there were allegation of atrocities committed during the reign of Kamuzu, this does mean that we can go as far as deleting kamuzu’s name from the history books.

History is significant for the upcoming generation: Secondly is that deleting the historical account of Dr. Kamuzu Banda from our nation’s history is like destroying our own history that has shaped the destiny of the nation for decades. This is also like denying the young generation from accessing the truth of our history. Why should we hide the truth of our history? History is not for us to keep but for us to share with the upcoming generation so that they can be guided and not make the same mistakes that once happened in the course of national development during Dr. Banda. Wise leaders are those who study their predecessors’ historical account so that they learn from their past mistakes and properly lead the people. If we are to raise wise leaders then we need to give they the piece of history as it is so that they can read and learn exactly what happened and why such atrocities were committed. It is dangerous to have a generation that can not understand it’s own history and existence.

Living a forgiving life is key to a brighter future for the north: Finally is that it is historically true that the Northern Region suffered in many ways as the author mentions in his article. As someone who comes from North, I understand and know exactly the pain the author is expressing here. I also know that it is due to the Banda’s oppressive rule that the nation lost many productive men and women who went into exile, denying them an opportunity to serve their motherland. Those of us who were born and grew up during the Kamuzu Banda’s regime have an idea how people suffered.

However the question is; shall we continue to allow our negative history to determine our destiny as a people? For how long shall we continue to nurse the pain of the past? When shall we learn to forgive each other and move on as a people belonging to one nation? We need to forgive and after all Kamuzu Banda apologised to the nation in his address in responding to such demands. We can not continue to live as unforgiving people yet calling ourselves Malawians. Forgiveness is a key to the success of any nation. We need to know that no any amount of pain will be equal to the pain that Christ went through even dying on that rugged cross BUT still the first thing he did was to speak FORGIVENESS for all those who nailed and made him suffer. Likewise for those of us whose relatives suffered under the Banda regime need to realise that it’s about time that we forgive and move on as a people. We should know that there is power in forgiving and this opens doors to success.