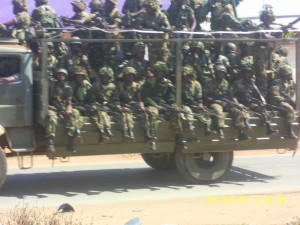 Tension in Limbe town is rising. Surprisingly it had no incidents yesterday. Many people have returned to their homes to avoid being shot by the Police. Unconfirmed reports suggest government has given the Malawi Army shoot to kill orders. So far no incident has been reported in either Blantyre or Limbe. However, tensions are rising in Lilongwe. Consequently, the Civil Society Organizations which organized the 20th July demonstrations have released a radio announcement warning citizens against continuing with the demonstrations as doing so is illegal. The announcement further advises citizens that grievances have been presented to the President Dr Bingu wa Mutharika for his consideration. Therefore, it was important to wait for the responses from the president. The announcement closes by conveying condolences to all those who lost their lives in the demonstrations and they did not die in vain. Similarly, the Malawi Police Service has issued a stern warning through the radio against continued demonstrations as that is criminal action and those involved will be subject to the Criminal Laws of Malawi.