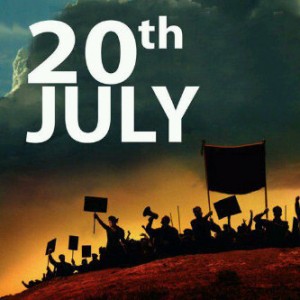 The security forces’ heavy-handed response to demonstrations, which reportedly saw the use of live ammunition in the capital Lilongwe, its second city Blantyre and the main northern city of Mzuzu may have echoes of the 2011 “Arab Spring” but “the context is entirely different,” Judy Smith-Hï¿½hn, a senior southern Africa researcher at South Africa’s Pretoria-based think-tank the Institute for Security Studies (ISS), told IRIN.

Petrus de Kock, a senior researcher at Johannesburg think-tank the South African Institute of International Affairs (SAIIA), told IRIN the violent response by Malawi’s security services may have been influenced by the “Arab Spring”, as southern Africaï¿½s governments were “very sensitive” to protests in the wake of recent events.

Among the grievances of Malawi’s protesters were repressive media legislation and poor economic management. Lilongwe-based political analyst Augustine Magolowondo told IRIN there was a “sense of betrayal” by the electorate after the 2009 elections saw President Bingu wa Mutharika overwhelmingly backed for a second term of office.

“A majority of Malawians relate what is happening now to the time of one-party authoritarianism and what is unfolding is people’s resistance against such a development” [with Wa Mutharika] restricting civil and political rights in addition to increasingly undermining, if not suffocating, democratic accountability institutions,” he said.

Under Wa Mutharika’s tenure Malawi’s food scarcity gave way to a booming rural economy which has seen the country produce a food surplus through an input agricultural scheme that has been described as a “unique green revolution”, but the purchase of a pricey presidential jet in 2010, when 60 percent of the 13 million population survive on a dollar day or less, caused some consternation among the donor community.

De Kock said a feature of democratic governments in the African sub-continent was “strong ruling parties that concentrate power and influence within cliques around them… with big class divisions” The majority of people are at the marginal level of subsistence and feel any slight rise in prices. The pressures on poor people’s livelihoods can very quickly trigger these types of situations.”

In September 2010 residents in the Mozambique capital Maputo protested against a raft of price increases from electricity to bread, forcing the Frelimo government to rescind the increases and maintain the subsidies introduced in 2008, ahead of the countryï¿½s 2009 national elections.

Economic analysts warned at the time that such blanket subsidies were unsustainable and Frelimo said the subsidy model would be modified in June 2011 with a food basket targeting the urban poor, and so save millions of dollars spent each month by the donor-dependent government on blanket subsidies.

Claudia Altorio, a spokesperson for the UN World Food Programme, told IRIN: “The basic food basket is still under review by the [Mozambican] government.”

Malawi, dependent for 40 percent of its budget on donors, has fallen out of favour with Western donors following concerns about human rights and poor governance, and funding has either been withheld or not renewed.

Donors flexed their muscles with Mozambique over similar issues and embarked on a “strike”, in which budget support was suspended between December 2009 and March 2010, demanding action on electoral reform, corruption, and the often blurred line between the state and Mozambiqueï¿½s ruling Frelimo party, among other things.

In Malawi donor concerns have left President Wa Mutharika undaunted: He vowed a zero-deficit 2011-2012 budget in June, and is attempting to fill the void left by the funding shortfall with a 16.5 percent value-added tax on previously excluded items, such as bread, milk and meat, as well as additional fuel levies.

The ISS said in a recent briefing statement that ï¿½donors were withholding more than US$400 million in aid in protest over government’s repressive media laws and bad governance,” but the most public spat has been with the UK, the former colonial power.

“Most of the missing aid is the British contribution, suspended since Wa Mutharika expelled the British high commissioner over remarks about authoritarianism and intolerance in a leaked cable,” said Africa Confidential, a specialist publication.

The UK provided about US$122 million annually to Malawi, of which $49 million went to funding Malawi”s public health sector, but the UK Department for International Development (DFID) made its final aid disbursement in March and has decided not to renew a six-year funding commitment which ended in June 2011.

In June 2011 International Monetary Fund resident representative Ruby Randall told local media in Lilongwe the government”s growth forecasts of 6.9 percent in 2011 and 6.6 percent in 2012 were not realistic.

“There are a number of structural constraints that Malawian industry is facing, like the shortage of fuel, inconsistent electricity supply, water shortages in cities,ï¿½ she said. ï¿½All this has affected output.”

The ISS said Wa Mutharika “now finds himself facing widespread dissatisfaction locally and bilaterally” The country’s “petrol stations are now characterized by long queues, and civil servants have gone for months without salaries and Malawi may be exhibiting the signs of bankruptcy. Wa Mutharika”s government is increasingly perceived as intolerant to dissenting voices.”

Political analyst Magolowondo said Wa Mutharika had illustrated that he was prepared for a “showdown with particularly Western donors [but] the nature of Malawiï¿½s economy, however, is such that for the foreseeable future, aid will remain critical…

“The continued sour relations between the president and development partners will, unfortunately, have negative consequences as at some point it will become clear that [the Malawi] government cannot go it alone,” he said.