United to End Stunting in Malawi 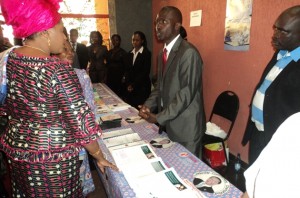 Callista Mutharika, Malawi’s First Lady, launched the Scaling up Nutrition (SUN) movement during a one-day meeting in Lilongwe last Thursday, July 28, by calling for stakeholders to work together to end stunting. I was moved by her passionate commitment to improve nutrition during the first 1,000 days and honored to be part of the celebration.

“Ending malnutrition and stunting is my priority,” she told a cheering crowd of more than 300 national and international stakeholders gathered at the Crossroads Hotel. Many participants wore colorful t-shirts and traditional cloths displaying the event’s theme: United to end stunting.

The First Lady’s support shows the strong commitment of Malawi’s leadership toward addressing chronic malnutrition. Forty-one percent of Malawian children are stunted, putting them at risk for more severe childhood illnesses, developmental delays, and death. In 2010, the government committed to reducing stunting by 50 percent over the next five years.

In a video address, David Nabarro, United Nations Special Representative on Food Security and Nutrition, said he was confident that Malawi will achieve its goal and congratulated participants on being a part of the first-ever national SUN launch. He was impressed with the steps the country has taken to improve policies and guidelines and build political will to create an enabling environment for nutrition.

I was very encouraged to see traditional healers and leaders from the private sector, the Medical Council, local government, the Farmers Union, and education united in their support of the movement. One by one, they made their way to the podium to make commitments to take specific actions to address malnutrition.

We know what interventions work to reduce stunting. In a study conducted by the Infant & Young Child Nutrition Project in collaboration with the Government of Malawi, the World Bank, and Bunda College of Agriculture, and presented at the meeting by Beatrice Mtimuni from Bunda College of Agriculture, we found simple actions that caregivers are able to take to improve feeding behaviors. For example, mothers were relieved to learn that fruit can be substituted for more costly tea, soft drinks, and biscuits to improve their children’s nutrition and health.

With this knowledge of what works and the overwhelming support demonstrated by a broad range of leaders, we can build a healthier future for mothers, children, and all Malawians.