This project has had an extremely positive impact on, literally, thousands of beneficiaries in urban Malawi. 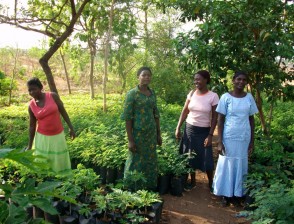 There were the students and teachers from four local schools who were able to establish school woodlots. There were the three thousand individuals from five local churches who plan to look after the woodlots in return for a sustainable harvest of construction timber and small quantities of fuel wood used for church activities.Thirty six local leaders from five different communities were involved which helped them meet obligations set by the Government of Malawi for local chiefs.

Over 9,000 new trees have been planted in Lilongwe since the start of the project. Communities were trained in briquette-making and 9,000 briquettes were distributed to encourage training and advocacy. Community members reported that fuel briquettes were far more efficient than firewood for several reasons, not least because people do not need to walk miles to collect them. The making of briquettes for home use and for sale has improved the lives of the poor communities that received training as the briquettes are easy to make so not only can they keep themselves and their families warm, they can also make an income out of selling the briquettes.

This project has also helped bring people together by working towards a common goal.  For example, there is a committee that has been set up who are responsible for managing the forest reserves that were established in the communities and ensuring people understand the importance of conserving forests rather than cutting down trees.

A teacher from one of the local schools was quoted as saying “Taking part in the reforestation activities at our school has helped us recognise that we can do something to improve our environment.”