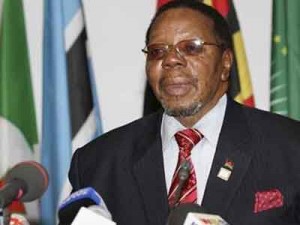 Revelations have emerged that Zambia’s Vice-president Guy Scott was denied an opportunity to make a speech at the 15th COMESA Heads of State Summit in Lilongwe over the weekend due to the tension between Zambian president Michael Sata and Malawi.

Sata boycotted the summit citing his being declared a prohibited immigrant and unwanted element in that country in 2007 before he became president. He sent his vice to represent Zambia and also to demand an apology.

Quoting COMESA secretariat sources, Nyasatimes of Malawi reports that Scott was one of the leaders of delegation lined-up by the secretariat to address the summit to move a Vote of Thanks during the official opening of the two-day long meeting on October 15, 2011.

“However, with the raging row between President Sata and President Mutharika, the in-coming COMESA Chairman, the latter vigorously protested against giving Scott a chance to address the summit.

“He (Mutharika) had no problems with anyone moving the Vote of Thanks but not Zambia,” the source within the main organizing committee of the 2011 Heads of State summit revealed, saying instead, President Pierre Nkurunzinza of Burundi moved the Vote of Thanks.

The source confided that the ‘senior’ Heads of State and Government that attended the summit, who included Zimbabwe’s Robert Mugabe, Sudanese Omar Hassan Al Bashir and the outgoing Chair, King Mswati of Swaziland, put their weight behind Mutharika to impress on the secretariat to bar Scott from moving the Vote of Thanks.

They reasoned that Nkurinzinza would be the right choice considering that he chairs the East African Community (EAC) at a time when the COMESA, EAC and the Southern Africa Development Community (SADC) tripartite negotiations aimed at creating a broader economic and monetary union were at an advanced stage.

According to a prepared speech sourced by Nyasa Times, which Scott was expected to deliver inside the Grand Marque at the New State House, the Zambian VP would have expressed his “sincere gratitude to the government and the people of the Republic of Malawi for the warm welcome and hospitality extended to my delegation since our arrival and that of other delegates in this country”.

Scott was expected to congratulate Malawi for assuming the chairmanship of this summit and the COMESA Authority and that he would have pledged Zambia’s full support “during your tenure as Chair”.

Scott was also expected to remind the summit that Zambia held its tripartite elections on September 20, 2011 in which “the then opposition party, the Patriotic Front, emerged victorious and formed government under the leadership of His Excellency Mr. Michael Chilufya Sata”.

“The smooth transfer of power in Africa has not always been easy. However, Zambia has continued to be a beacon in this arena of democratic elections and peaceful transfer of power. We, as Zambia, are marking the third fifth such transfer since independence in 1964.

“I would like to take this opportunity on behalf of the Zambian people and indeed on my own behalf to express gratitude for the numerous congratulatory messages we have continued to receive from the region,” reads Guy Scott’s unread speech, in which he also assures COMESA member states that Zambia shall continue to uphold the tenets of democracy, and place “science and technology at the centre of our development efforts”.

This summit this year was held under the theme “Harnessing Science and Technology for Development”.