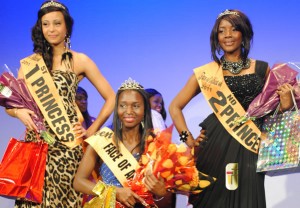 Zimbabwean 18 year old Monalisa Moyo to the title of Miss Face of Africa UK 2011 Sonia Bott 21 from Zimbabwe was crowned First Princess and Shalom Kubwalo 24 from Malawi was Second Princess. The event took place at Nottingham Arts Theatre last night. The evening started off with a great performance by our very own Zimbabwean Brain McKnight, Cecil Farayi singing his own version of discovery which left all the ladies feeling very sentimental.
The Eight contestants then walked in as they were being introduced by the host of the evening Mr. Roby Gee.
Entertainment for the night ranged from different parts of Africa, there was the likes of Carlson and Cole from Zimbabwe, David Kutyola from Malawi, Obi Rudo from Congo, K Classic, Ogga Kattalog, R Milla and Silvaa King all from Zimbabwe. Ju’Ce the designer for ZimStylze showcased some of his latest collection .The Judges panel was also a selection of different countries, Dancehall Ambassador Jusa Dementer was representing Zimbabwe amongst others .The highlight of the evening for me was no doubt the creativity category where the contestants were given a meter cloth in length to make an outfit, but not allowed to stitch so were judged on imagination and accessories and they had to bring an African artifact to talk about.

We saw some great outfits come out of that, they were all unique in their own way .A charity called To God be the Glory were the main sponsors of the event as they were the ones sponsoring the main prize of the evening which is a 2 week trip to Malawi for the Queen to go and do some charity work. I will be keeping you updated with `what the Queen will be getting up to through-out the year. I got a chance to speak to the Queen after the show and she expressed how shocked and nervous she was, but certainly happy she won as she had been working very hard for this competition.