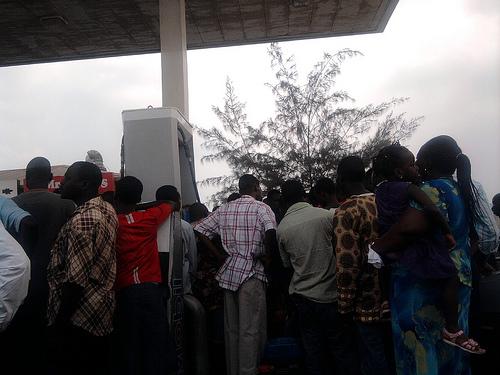 “There is fuel in Monkey Bay!” a text message reads. A game of telephone quickly transpires. “Get there quick! No queues! Will be out soon!”

Filling up in Malawi has become increasingly difficult and expensive.

This week’s five-day drought is said to be the worse since the fuel crisis in 2009, forcing drivers to queue sometimes for days.

Due to a shortage of foreign exchange in Malawi, the country can only afford to import half the needed fuel per month, according to a report by Petroleum Importers Limited (PIL), a company mandated to import petrol in Malawi.

After driving to Lake Malawi from Blantyre with a group of friends the fuel light is flashing. We hurry to Monkey Bay’s filling station. When we get there the attendant tells us the fuel has already run out.

“But the police officer just told us there was fuel still here,” insists my Malawian friend. An argument ensues and we are forced to leave­ the pump.

Down the street a man waves us down and he saunters up to the window. “You want fuel? I can get you fuel,” he whispers.

“We only buy fuel from the station,” my friend protests.

Fake fuel has been flooding the black market, which has now become a major industry in Malawi. Men carrying jerry cans full of fuel around town can sell gas for $6 per litre. More then three times the government recommended pump price of $2.30 per litre. In Canada fuel is selling for $1.20 a litre.

Fuel and forex shortages have caused prices in Malawi to skyrocket. Maize prices, the country’s staple food, rose by 22 per cent in September and a further 15 per cent in October, according to a cost-of-living survey by a local NGO called the Centre for Social Concern (CFSC). Price increases have caused desperate situations for the majority of the population, who live on less then a dollar a day.

The man trying to procure fuel for us continues on, “I can get it from the station. They aren’t out. They won’t sell to you because they are holding on to extra fuel to sell it for more later.”

We follow him.  Soon the Toyota SUV is quietly parked behind a tree with its headlights off.

The plan is that another car is going to fill up at the pump and then exchange the gas with our car. We watch from a distance in order to ensure it’s real fuel coming from the pump. I feel like I’m apart of a drug deal- no longer simply filling up at the fuel pump.

The man, who is a tour guide of the Lake, reports back. He tells us the attendant refuses to fill up the car worried it will cause a huge commotion and vehicles will line up demanding fuel. We ask to speak to the owners.

A few minutes later we are sitting behind the gas station at a local bar having a few beers with the owners.  Small talk is exchange before the real reason we are sitting in the bar is brought up.  “My friend I need fuel. Can you help us? We can pay extra,” asks my friend.

The brothers, who own the station, also happen to be fishermen.  The owners tell us they keep extra fuel for their fishing boats and will sell us some.

After three hours of searching for gas and tough negotiations the deal is secure. Tomorrow at 4 in the morning we can fill up for selling price.  The next morning, an employee fills up the car’s tank in complete darkness in order to avoid spreading rumors that there is gas in the village.

Finally, our fuel hunt has come to an end. With half a tank we can get back to Blantyre to start the hunt all over again.