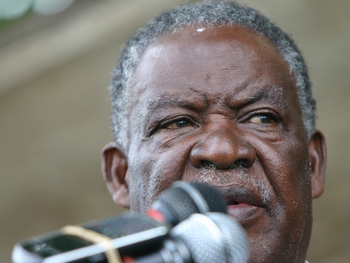 President Michael Sata has said that he is deeply saddened over the death of Mine Workers Union of Zambia (MUZ) president Oswell Munyenyembe. Mr. Munyenyembe, 59, died in a car crash on the Kitwe-Ndola dual carriageway on Tuesday afternoon.

“Oswell was someone with exemplary trade union skills and it was always a joy to see him doing what he knew best – presiding over negotiations and always accomplishing what his members expected of him,” President Sata said.

“Therefore, I have no doubt in my mind that the effect of this sudden loss is already being felt by both the employees and the management in our robust mining sector. His bravely, courage and maturity even on crucial moments is simply peerless or first-class.”

The President said Munyenyembe has been a beckon of hope, courage and bravery for the labour movement since the commencement of his trade union career in 1983.

“During his many years in the trade union movement, his dedication and selfless nature was always something that many passionately admired and esteemed. Even outside his work, Oswell carried himself as a kind, honest and a man of great honor and strength,” the Head of State said.

“Indeed, he will be greatly missed and we are all saddened by his passing and our thoughts and prayers are with the Munyenyembe family,” the President said.

“We pray that the Almighty God gives them comfort and fortitude as they face these immense difficulties.”