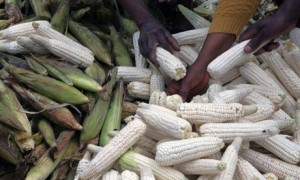 Malawi’s maize-growing central and southern regions have not had good rains, prompting concerns about possible shortages of the staple in the coming months.

“I think it could be one of the worst shortages we have seen in recent times,” said an early warning official who preferred anonymity. “The rains have never been so erratic. In some parts of Malawi small farmers have gone in for a second round of planting after the crops failed; and the seed they have used is not of good quality so it will not give good yields.”

With maize plants still in the early stages of growth, there is concern the crop might not be ready for harvest at the usual time in April-May. “The lean season [which ends in March] might be extended for a longer period,” said the early warning official.

The latest situation update (on 31 January) from the UN Children’s Fund (UNICEF) is, however, optimistic that despite erratic rains there are “still positive indications that the country may still register a good harvest if the rainfall season goes up to end March or early April”.

The country has adequate supplies of maize for the moment and the number of people in need this lean season has been low – 201,854 – compared to previous years (when numbers have often run into a million at least). But aid workers say the Malawi Vulnerability Assessment Committee (MVAC), which comprises the government and civil society, is currently revising the figures and the numbers could go up by at least a third.

Unprecedented floods early in the year in the southern district of Nsanje have displaced more than 6,000 people; some areas have also been affected by a cholera outbreak, with 64 cases reported so far.

Maize meal prices climbed by more than 60 percent in the last four months of 2011 due to fuel and foreign currency shortages. The USAID-funded Famine Early Warning Networks (FEWS NET) in its latest report has warned that price rises in the south may accelerate, worsening the nutritional levels of the urban poor.
”Time is running out. The status quo of doing nothing about the reported over-valued currency doesn’t seem to be an option any more”

An input subsidy programme in recent years had helped Malawi become self-sufficient in maize, but in the past two years the country has fallen out of favour with its Western donors (over human rights and poor governance) who provided 40 percent of its budget.

Citing government figures, Blessings Chinsinga, a policy expert who works in agriculture and lectures at the University of Malawi , said donor funding that had either been withheld or not renewed amounted to about US$800 million.

Malawi has been forced to borrow from other countries. In December 2011, for example, India loaned tractors and maize shellers to Malawi under a 40-year deal.

Tobacco exports, a major foreign exchange earner, have also plunged. “The country earned about $300 million a year from tobacco exports which is the bill for its annual fuel imports,” said Chinsinga.

Deputy Minister of Agriculture Kingsley Namankhwa told IRIN poor tobacco earnings had led to foreign exchange shortages – and the future looks gloomier: Tobacco output in Malawi is expected to halve in 2012, according to reports.

Farmers, discouraged by their failure to attract good prices, have planted less, and poor rains have damaged standing crops, according to the Tobacco Association of Malawi.

The deputy minister said the government was trying to encourage farmers to diversify and grow other cash crops like cotton, and was targeting 500,000 smallholder farmers.

But Chinsinga was dismissive of the strategy: It would fail to help in the short-term, and when the cotton eventually got to market, competition with leading cotton producers would be difficult because of the low volumes involved.

There has been growing international and domestic pressure to devalue the kwacha to make it viable for traders to export and generate foreign exchange.

Officially the kwacha is pegged at 166 to the dollar, but the parallel market rate is 270-300. Unhappy with the first round of devaluation in 2011, which it said was instrumental in hiking prices, the government has refused to devalue again.

Dalitso Kubalasa, executive director of the Malawi Economic Justice Network, a coalition of more 100 NGOs, has urged the government to devalue the currency and implement measures suggested by the International Monetary Fund (IMF) which should at least get development partners talking to the government.

“Time is running out,” he said. “The status quo of doing nothing about the reported over-valued currency doesn’t seem to be an option any more – as prices of things are going up with each passing moment, hurting the poor even more.”

But criticisms by NGOs have not gone down well with President Bingu wa Mutharika, who has called for legislation to make civil society “accountable,” following civil unrest in July 2011.

FEWS NET and the UN Food and Agriculture Organization (FAO) said the move was made after most maize had been exported, and Deputy Minister Namankhwa described the ban as “a temporary measure to avert the massive externalization of the commodity”.

The government has also tried to control maize prices by increasing the price of maize sold through the state grain marketer, ADMARC, from the equivalent of 24 to 36 US cents per kg.

Namankhwa said the move was designed to discourage traders from buying through ADMARC and reselling. He said the strategy seemed to be working, prices had begun to come down, and the vulnerable “are in safe hands”.

But UN agencies and Chinsinga say maize price increases in the country have been triggered by the increase in ADMARC prices.