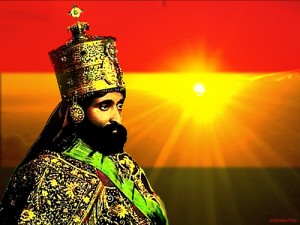 Emperor Haile Selassie was no pan-Africanist. In fact there is overwhelming evidence of his autocracy and rejection of the Black cause. It will be an injustice to African history to erect his statue at the new AU headquarters in Addis Ababa.

The Ethiopian Pan-African Society would like to express its views on the demands by Ethiopian individuals forwarded to you to consider the erection of the statue of ex-emperor Haile Selassie along with that of Dr. Kwame Nkrumah at the premises of the new AU headquarters. We strongly urge you not to consider this demand as the ex-emperor was neither a pan-Africanist nor a model head of state to be emulated.

Whether or not the ex-emperor of Ethiopia has contributed to Pan-Africanism cannot be judged:

• through the songs of Bob Marley, other Rasta reggae singers or through the Ethiopian singer, Tewodros Kassahun

• through sentimental anecdotes on such as what happened at the founding conference of the OAU in 1963 as a certain Mismaku did recently.

1. Africa is in a deep crisis emanating from a prevailing system of governance that is corrupt and dictatorial through and through. That calls for an egalitarian system of governance that takes the crying plights of the ordinary African into consideration. Cultivating the new generation of Africans imbued with the spirit of Pan-Africanism that springs from the plight of the poor and with freedom and democracy in the first place is an absolute pre-requisite. Construction of Africa’s own history can be part of this process of cultivating such a new generation. The place we give to past heads of state in the contemporary history of Africa is as crucial. This is where our serious objection to the eulogy paid to the ex-emperor of Ethiopia.

Anybody who has contributed to Pan-Africanism must be judged by the person’s contribution to the construction of the very thought of Pan-Africanism; or by what they did in practice to advance Pan-Africanism be it in the area of liberating Africa from colonisation or by a construction of ideas towards an egalitarian (democratic and free) system of governance for the continent. To that extent, the ex-emperor of Ethiopia or his government had not done anything exceptionally more than what the rest of independent states of Africa did at the time. The support the ex-emperor rendered to the Kenyatta family during Kenya’s struggle against British colonisation and the military training given to Nelson Mandela before his imprisonment were not exceptional at all as other African governments, the front line state to Southern Africa in particular, had done more to the extent of being attacked by the apartheid regime. Tanzania and Zambia have been attacked and Mozambique in particular was subjected to regular aerial bombardment by apartheid forces, which finally shot down an aircraft killing the country’s president, Samora Machel. (Speaking of statues, Samora Machel, Edwardo Mondlane, Amilcal Cabral, Patrice Lumumba were real heroes of Africa’s liberation and who stood for Pan-Africanism and sacrificed for it. These are the ones who deserve statues along with Nkrumah.)

2. At the beginning of the second millennium, the BBC held an opinion survey and collected votes from its listeners in Africa as to who their ‘African of the Millennium’ was. Kwame Nkrumah was voted first by a huge margin followed by Nelson Mandela in the second place. It is for their monumental contribution to Africa’s liberation and to the thought of Pan-Africanism as well as for their exemplary role that Kwame Nkrumah and Nelson Mandela were voted as ‘my African of the millennium’. This is a prototype of African perception of leaders who contributed for Africa.

3. Apart from issues of construction of ideas and direct contribution to Africa’s liberation, another crucial element is the leaders’ own internal policies on governance. What were their policies particularly as regards the various ethnic groups within their own countries? Pan-Africanism is an African outlook and is deeply rooted on the identity of Africans as black people because of the dehumanisation by colonisation. This is indeed the bottom line as nobody can be a pan-Africanist disregarding black identity.

The record of the ex-emperor of Ethiopia in this regard is shocking to say the least. First, slavery was practiced in Ethiopia widely. People of the border regions who are physically Nilotic or Bantu were taken in custody by the monarchy, nobility and feudal lords under his regime and kept forcibly as slaves. In fact, in order to prevent escape, tissues from the hamstrings of most of the male ‘slaves’ were cut out. Ethiopia had difficulties in joining the League of Nations precisely because of the practice of slavery. After the war, chattel slavery continued to the final days of the emperor in 1974. The ex-emperor of Ethiopia had not lifted a finger to end slavery in his own country. On the contrary, he was one of the big owners of chattel claves.

Secondly, the nobility at the time of his rule never considered themselves as black and African. For political reasons, being African was ‘accepted’ particularly when the OAU was about to be established. But, being black has never been accepted. No wonder when the ex-emperor visited Jamaica in 1967, he said in an interview with a journalist that, ‘We Ethiopians are not black’. The ruling ideas of a given society at a given point in time are also the ideas of the ruling class. That includes negative ideas filled with all sorts of bigotry. But if such ideas are not deconstructed thoroughly, they persist for too long. This notion of ‘not being black’ is still widespread in Ethiopia. It is even noticeable today among members of the Diaspora, who refer to Nilotic or Bantu Africans as ‘black’. These are undeniable facts that can be proved so easily.

Thirdly, one can also look at the ex-emperor’s policy on Ethiopian ethnic groups other than the Amhara. Discrimination and political as well as economic marginalisation was the daily companion of millions and millions of non-Amhara Ethiopians. Their lands were taken over by the feudal lords and were treated as second-class citizens. Many were forced to change their names to Amharic ones to be accepted. Those who resorted to rebellions were met with fierce punishment including outright massacres as in the case of Tigray (1943), Eritrea (1961-1974), Ogaden (1960-1974), Bale (1967), Sidamo and many other places. The ex-emperor’s ‘Imperial Body Guard’ shot in the crowd of university students on December 29, who assembled to pay the last respects to their leaders assassinated the previous day by the ex-emperor’s secret police. The repressive rule also clamped down against trade union activists and student leaders. Trade unionists such as Abera Gemu and student leaders such as Tilahun Gizaw were assassinated in broad daylight. (Incidentally, Tilahin Gizaw was a champion of Pan-Africanism who received a gun shot by police during a demonstration against Ian Smiths’ Unilateral Declaration of Independence and he was also instrumental in organising a rally in solidarity in 1969 with the struggling people of South Africa and Zimbabwe.)

The ex-emperor was also known for his cruelty and viciousness. Apart from the massacres committed in the Ogaden, Eritrea and so on, his regime had also practiced the most heinous crimes. Lands were confiscated from the rural population (poor farmers and nomads) without compensation; political opponents or conscientious objectors were met with police brutality including torture. Political suspects were banished to remote areas. The ex-emperor is even accused of practicing witchcraft orgies in which he sacrificed children for a spirit called Korit at Lake Bishoftu. In 1961, he personally ordered the corpse of Girmame Neway, the slain coup leader, to be hanged and displayed in public. When all these crimes were committed, the ex-emperor appeared extremely calm and ‘dignified’. Needless to say, sir, we simply cannot list all the crimes of the ex-emperor.

We hold that the current regime in Ethiopia is as autocratic as ex-emperor Haile Selassie’s and Colonel Mengistu’s. We applaud the struggle of the people of Ethiopia for justice and freedom. We understand that the Ethiopian Diaspora is also active in this struggle. But fighting against injustice with injustice done to Ethiopia’s history is something that won’t work.

Sir, we fully support the erection of Kwame Nkrumah’s statue at the premises of the new AU headquarters and strongly demand that you ignore the demand to have a statue for the ex-emperor Haile Selassie alongside it. If other African heroes are to be included in the list deserving their statue in the AU premises, we suggest the inclusion of Nelson Mandela, Patrice Lumumba, Amilcar Cabral, Samora Machel and Edwardo Mondlane.