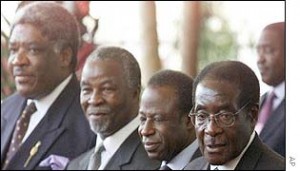 It will not be easy to achieve the African Union’s goals of economic progress and good governance, United Nations secretary general Kofi Annan, has warned.

He was speaking at the last summit of the Organisation of African Unity (OAU) in the South African port city of Durban.

OAU-AU
Helped end white rule
Seen as dictators’ club
New focus: economic progress, good governance
On Tuesday, the OAU will be relaunched as the African Union (AU), which is supposed to be more people-orientated, in contrast to the “dictators’ club” of the OAU.

Leaders from across Africa have gathered for the twin summits in the South African port city of Durban.

The new 53-member AU is loosely modelled on the European Union and will have the right to intervene in the affairs of its member states, in cases of genocide and war crimes.

The union is the brainchild of Libyan leader Colonel Muammar Gaddafi, who was keen to host its headquarters, but Mr Mbeki will be the AU’s first chairman.

Mr Annan said that integration was the way to develop Africa’s economy but said that its poor infrastructure, debt burden and many conflicts were sizeable challenges.

“To build a successful union in such conditions will require great stamina and iron political will,” said Mr Annan.

He said that Africa must solve its problems before expecting Western leaders to increase its aid or forgive debts.

This is the gist of Africa’s latest development plan – the New Partnership for Africa’s Development (Nepad).

“They will respect us even more when they see us actually resolve the conflicts that disfigure our continent. And I do mean, resolve them. Managing them is not enough,” he said.

But Colonel Gaddafi was not asking for Western aid:

“We are not children who need to be taught.”

But a wrangle over where the AU should be based looks set to get it off on the wrong footing.

Colonel Gaddafi wants the AU headquarters to be in Libya but it seems likely to be in Addis Ababa – like the OAU.

According to its charter, the AU will be very different from the OAU:

The AU will have a peacekeeping force, whereas the OAU stressed non-interference in the internal affairs of member-states.

It will also have its own central bank and court of justice and will work towards creating a single currency.

It will also have close relations with Nepad – the New Partnership for Africa’s Development – which pledges improved economic and political governance for the people of Africa.

After a seven month power struggle, he has been recognised as head of state by the US, France, Germany and other western nations.

“The decision … is a matter of principle and is a reaffirmation of our commitment to the ideals of governance that we, as the OAU, have made,” said Mr Mwanawasa.

He pointed to recent elections in Sierra Leone, Mali, Lesotho and even Robert Mugabe’s controversial re-election in Zimbabwe as success stories.

Such statements have revived criticisms in some quarters that the organisation remains little more than an old dictators club.