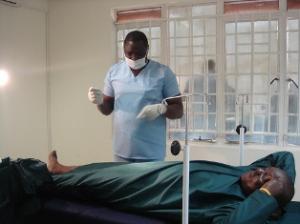 At least 15, 000 Malawian men have been circumcised since the launch of a special campaign in nine pilot districts in 2011.

STI and Male Circumcision officer in the Ministry of Health, Mr. Amon Nkhata told Zodiak Online in Blantyre that the demand to have this surgery is growing.

“The demand is rising especially among young men following research findings which indicated that the surgery reduces the risk of contracting HIV by 60 percent,” said Nkhata.

The ministry is scaling up provision of the service by training state registered nurses to provide the service apart from medical doctors and clinical officers.

Apart from reducing the risk of contracting HIV, circumcision also reduces the risk for women to contract causes cervical cancer.

“But although the campaign is receiving overwhelming response from men especially the youth, the surgery on its own does not completely protect one from contracting HIV, it just reduces the risk by 60 per cent,” cautions Mr. Nkhata.

Nkhatabay, Salima, Dedza, Nkhotakota, Thyolo, Phalombe, Mulanje, Mangochi and Machinga are the nine districts where ministry of health with help from the World Bank piloted the initiative.

The campaign is expected to extend to three more districts – Lilongwe, Blantyre and Chiradzulu.