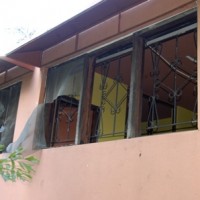 Once the hub and focal point of entertainment activities in the country, the once mighty French Cultural Centre in Blantyre now lies in ruins, stripped and plundered to its bare minimum by looters who have found it an easy target due to lack of security at the premises.

Extensive investigations carried out by The Weekender reveal that the former entertainment mecca is in so bad a shape that artist might as well abandon dreams of the centre becoming functional this year.

Government created a buzz in the arts sector when it recently announced that it had paid the French embassy K300 million to acquire the centre after the French had announced that they were closing shop after 38 years of service.

Director of Culture in the Ministry of Tourism, Wildlife and Culture Elizabeth Gomani-Chindebvu, says the K300 million figure catered for everything at the FCC but for a few items which the French Embassy went with.

Investigations by The Weekender reveal that the process of purchase and handover between the Malawi government and the French Embassy was not properly coordinated, which led to the centre being left without any security detail.

A source who used to work at the French Embassy confided in The Weekender that the crust of the problem arose after the French demanded that they be paid for the purchase in US dollars which would be channelled directly to France. But government delayed in remitting the payment due to the forex shortages currently facing the country.

Resultantly, the French Embassy refused to hand over the keys to the Malawi government until they paid the money to France. But this also meant that the FCC did not have any security guards as the French had removed their security detail, leaving the place vulnerable to vandals.

Since June last year, the centre has had no security, and the Malawi government only brought in security guards early this year after our sister paper The Daily Times had reported the situation. But it was too late as thieves had already walked away with everything that they could remove.

According to our source, the government paid France this year after which they were given the keys.

Our investigations also revealed that the music equipment at the centre, worth K7.5 million, was stolen.

A visit to the centre by our team found that the auditorium has been stripped bare, with most of the important items such as guitars, mixers, keyboards, drums and speakers all gone.

At the entrance to the centre, the first thing that greets you is the vandalised security house, whose windows and window panes were stolen.

Next, the vehicle on the car park, which was used by the centre’s last director Johanna Durand and was in running condition when the French were leaving now lies on bricks, its tyres, lights and other vital parts gone.

Upon entry into the building, one is shocked as there are no doors, window panes and windows. The story replicates itself in all the classes, the library where the thieves even had the freedom to remove ceilings, electrical wires, cables, cisterns and carpets.

The audio-visual room, where people used to watch films and the auditorium where the audience enjoyed great performances have been plundered.

The house of the director is actually the worst, with everything removed.

The centre had a generator which has been plundered as the thieves tried to remove it but they failed and resorted to destroying it.

A layman’s rough cost assessment of the damage indicates that government will once again dig deeper into its coffers to bring this once mighty entertainment haven back to its feet.

Chindebvu agrees the government will spend millions to rehabilitate the centre. She could not say how much the rehabilitation will cost.

“The government is working on that, of course at the moment we are still waiting for the building committee to do their estimations but a budget will be there,” she said.

The French Cultural Centre has hosted some of the world’s finest performers, among them renowned singer and songwriter Angélique Kidjo, who once performed at the centre bemoaned its closure recently when she met the likes of Ben Mankhamba in Germany during a festival.

The Grammy Award–winning Beninoise singer and activist described the centre as a link between local and foreign musicians but that now is history.