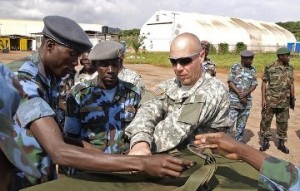 On Saturday, four African countries with the backing of the United Nations and the African Union (AU) will officially launch a joint military operation aimed at hunting down the Lord’s Resistance Army (LRA) rebels and its elusive leader Joseph Kony.

The newly established unit will be comprised of 5,000 soldiers from Uganda, South Sudan, the Democratic Republic of Congo (DRC) and Central Africa Republic (CAR). These are the nations that have been most affected by more than two decades of LRA insurgency.

“The idea is to put in place a strategy, which has been discussed here today… then tomorrow we are going to Juba in the Republic of South Sudan to launch the joint operations tasks force composed [of] Ugandan forces, Central African Republic forces, South Sudan and DRC [Democratic Republic of the Congo],” Francisco Madeira, the AU Special Envoy for the LRA issue, said in a statement.

Formed in Uganda in the late 1980s, the notorious LRA rebels have, for over 15 years, mainly targeted civilians and the army. Following regional armies’ offensive the LRA moved to neighboring countries and massively killed, abducted, raped and displaced thousands of the population.

As part of the strategy, Madeira said, the regional task force headquarters will be located in Yambio, the provincial capital of South Sudan’s Western Equatoria state, which borders the DRC. The four African countries, he added, are represented in the Joint Coordination Operations Centre and have reportedly agreed on free movement of troops across borders to pursue the LRA.

According to the UN department for peacekeeping operations suggest that the LRA is now down to less than 500 combatants operating under Kony’s leadership. But its capacity to attack, terrorise and harm local communities remains of grave concern.

On Thursday, a US-based Human Rights Watch (HRW) said concrete actions, not just more talk, are urgently required as the UN and AU finalize a comprehensive anti-LRA strategy with the help of African countries.

In a statement earlier on, Anneke Van Woudenberg, a senior researcher at HRW said, “The Kampala meeting needs to generate concrete action to end LRA abuses and not just more talk,” while calling for more assistance to be provided to people living in LRA-affected areas.

The arrest of Kony and other LRA leaders, HRW argues, should be a central element of any strategy to end LRA atrocities, further saying that enhanced arrest efforts and broader and more effective measures are also needed to protect civilians endangered by the LRA, including those who may be at risk from the anti-LRA operation.

Meanwhile, civil society groups in the DRC, CAR, and South Sudan have also stepped up the pressure on their respective governments, calling for actions against the LRA.

“Civilians in this remote region have no protection from LRA attacks, and often no means of communicating with others to call for help. We can only truly rejoice when the LRA threat is over and when we hear that Joseph Kony is no longer terrorizing our region,” 20 groups reportedly wrote in a November 20 letter to their presidents.

At the special session of the AU Assembly held on August 31, 2009, African Heads of states adopted a plan of action on the consideration and resolution of conflicts. This plan of action called upon African countries “to neutralize the LRA and bring an end to its atrocities and .destabilizing activities in the DRC, Southern Sudan and CAR”.

In 2011, the AU drafted a paper on the establishment of a regional task force (RTF) in the countries affected by LRA.