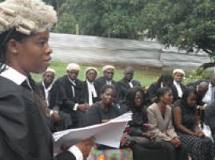 Police, lawyers and the courts have admitted that while they celebrate the end of the two and a half months Judiciary strike which paralysed the justice delivery system in Malawi, it will be a tall order to clear the backlog.

The Judiciary strike, initially started by support staff on January 9 2012 and joined by judges and magistrates on March 1 this year, ended at the weekend following an agreement between the Executive and the Judiciary that new conditions of service and salaries approved by Parliament in 2006 will be implemented, including payment of arrears.

In Blantyre, the staff on Monday said they were awaiting an address by Chief Justice Lovemore Munlo scheduled for Tuesday to resume work in earnest, according to spokesperson for the Judiciary support staff Austin Kamanga.

Malawi Law Society (MLS) secretary Bright Theu, in an interview on Monday, said the opening of the courts was a big relief to the public as a whole, but admitted there would be pressure on lawyers and the courts.

He hoped that the courts would handle the three months case chunk, but said a lot of time has been lost and evidence in some cases might have been affected in one way or the other.

He said he expects courts to give people more time where possible to prepare for cases.

Mzuzu High Court registrar Dick Sankhulani confirmed that the courts were now operational, but said there was a lot of work to be done. He said there is need for dedication so that the operations can stabilise in two months’ time.

“By end of [Tuesday], we will know how much work will be done and how it will be handled. We will find a way to accommodate all people because there is need to absorb the pressure,” said Sankhulani.

However, since the announcement to end the strike was made on Saturday, finer details and important information the support staff want to hear include when the arrears are going to be paid, percentages effected for 2009 and progress on 2012 increments which have been kept under wraps.

High Court and Supreme Court of Appeal deputy registrar Mike Tembo said in an interview the support staff were briefed on Monday in Blantyre and were happy after they were assured arrears would be paid.

Tembo said Monday’s meeting was brief to avoid pre-empting this Tuesday’s meeting by the Chief Justice which is open to all the Judiciary officers, including magistrates and judges from Southern and Eastern regions.

Chief Secretary to the Government Bright Msaka told journalists in Lilongwe on Saturday night that the Executive and the Judiciary had reached an agreement with conditions convenient to both parties.

Supreme Court of Appeal Judge Atanazio Tembo, who is chairperson of the Working Committee on Judiciary Conditions of Service, signed that pact on behalf of the Judiciary and attended the Lilongwe news conference.

The support staff downed tools on January 9 to press for payment of arrears dating back to 2006 as was approved by Parliament. Judiciary perks are reviewed after every three years, but nothing was done in 2009 and now 2012.

Following government’s inaction to resolve the matter, which grounded the justice delivery system, senior judicial officers that included judges and magistrates joined the strike, a move that apparently jilted the Executive to act on the matter.

Meanwhile, although Judiciary staff returned to work on Monday, only a negligible number of cases out of thousands on the waiting list went to court.

In Lilongwe, only three minor cases were registered at the registry. On the bigger part of the opening day, court staff members were busy cleaning offices and the surroundings.

Some support staff members at Lilongwe High Court said the courts remained uncleaned since the beginning of the strike so they were not conducive for operations.

“All the rooms, offices, even the chambers needed thorough cleaning because all this time, they were deserted,” said one court support staff member at Lilongwe High Court.