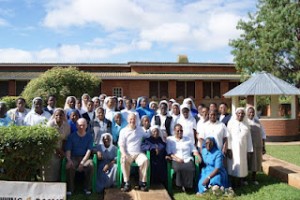 The Charge’D’affairs to Malawi Monsignor Hubertus Van Megen has called on the Religious Sisters to listen carefully to the simple people in Society.
Monsignor Van Megen said this during the closing mass of a 5 day conference that theConsecrated Women in Eastern and Central Africa (ACWECA) organized for formators in Lilongwe at Msamba (St. Theresa House).
“We have to listen carefully to the poor in our villages, in our cities, to the uneducated, to the people who also live at the peripheral of the church,” he said.
He said we have to learn to read in between the lines in order to understand how Jesus speaks through the poor, how he speaks through the uneducated, how he speaks with those who are outcast and do not count the society.
Taking a look at Nicodemus who didn’t dare to commit himself completely to the call of Jesus, he said as religious, there must be this call this little inner voice in your hearts which calls you to a closer following of Jesus Christ, following more closely in his footsteps.
He added, “Like nicodemus, God is calling us to give more in our lives, to have more radical style of life and to give up everything we have”. “Do it now… and don’t wait to last moment,” he said.
In an interview with Catholic Communications Network to find out why they organized such a workshop,   the Secretary General for ACWECA Rev. Sister Catherine Okari said the workshop was organized for formators, vocation animators, novice mistresses, postulant mistresses, junior mistresses and council members in charge of formation to help them update their skills and also to create a forum of sharing of the challenges in the area of formation within AMECEA region.
She said this is the second time in Malawi to have workshop for formators and between the first workshop in 2009 and this one “I have seen great, great improvement.  I am very, very nicely surprised by the workshop this time and the openness of the sisters”.
She explained that the sisters were looking at the role of a formator and the role of accompaniment in formation and mentoring.
“The sisters are needed to be helped more on how to accompany a young girl who wants to respond to religious call, what are some of the skills that the formator need to have. So we are exploring at what is accompaniment and what it is not,” she said.
She said the sisters are doing a good job; they are very open to growth, “I pray that they will continue to have support from the Church and from the laity as they respond to their vocation”.
Training sisters in formation and continuous upgrading of skills is one of the goals set in the ACWECA Strategic plan. During the launch of the strategic plan in January this year, Archbishop Ziyaye urged the sisters to take into account the fact that many girls who are admitted to consecrated life are from public schools and therefore may lack the basic Christian formation that is necessary for consecrated life. He said Solid formation therefore, presupposes that those who accompany such girls must be well disposed and prepared.
The Association of Consecrated Women in Eastern and Central Africa (ACWECA) is an Association of Sisters comprising of nine (9) national sisterhood Associations drawn from Eritrea, Ethiopia, Kenya, Malawi, Sudan, South Sudan, Tanzania, Uganda and Zambia.

The vision of ACWECA is to have spirit filled women religious with solid holistic formation for authentic witness to the world. Its mission is to empower women religious in living a consecrated life.

The facilitators were brother Romeo J. Bonsaint and brother John Hamilton, from the United States. The workshop sessions were facilitated by Sr. Catherine Okari from Kenya, ACWECA General Secretary.

About 45 sisters from Malawi and Zambia (Chipata) participated in the workshop.
(Visited 54 times, 1 visits today)
Africa