Malawian married women have joined Tips for Married Women, a network of married women in UK and South Africa that seeks to bolster marriages by offering advice and also assisting in other problems.

The network has 1130 membership worldwide and has three administrators, for Malawi its Evelyn Nyirenda, South Africa its Connie wa Donnie and in UK its Jamilla Jonathan.

These women use new media such as Face book as their meeting point and discussion forum, according to Malawi Administrator Evelyn Nyirenda.

The donated items which included, feeding bottles, clothes, Likuni Phala, soap and Bananas were bought using individual contributions from the group’s membership of more than 20 women.

The orphanage, which is based in the low density suburbs of Chimaliro in Mzuzu, takes care of babies from day old to 18 months and has a maximum capacity of 15. Since inception in 2006, the Nursery has taken care of more than 80
babies and some have been adopted by families in Germany, UK and
Canada.

These women use new media such as Face book as their meeting point and discussion forum, according to the organization’s Administrator Evelyn Nyirenda. Nyirenda told The Daily IIJ that they decided to assist the orphans as concerned mothers.

Ministry of Hope Crisis Nursery Mzuzu Director Joyce Nyasulu hailed the women for the donation saying it is becoming rare for the Nursery to receive donations.

“You will be ambassadors for this Nursery because we miss people like you to visit us. We take care of babies in their crisis period when their mother has died or abandoned them. It is a critical period,” Nyasulu said.

She also said the orphanage does not receive many local donors as it relies on its American donors. “We expect at least Malawians to come in full force since these are 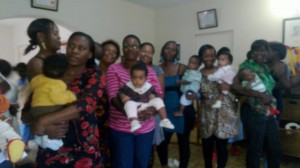 they own people,” she said.