Sorrow engulfed many as viewing of Bingu’s body begins

As they paid their last respects, some were visibly shocked, while others wept. Others failed to control their sorrow as they wailed. 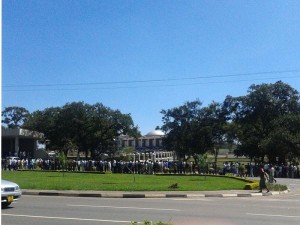 As the shock and pain of Mutharika’s death sank in the hearts of his closest associates and aides on Sunday, several cabinet ministers and top Democratic Progressive Party (DPP) functionaries wept profusely after viewing his body at the State House.

Mutharika’s widow, Calista Mutharika arrived in the Banquet Room where the body laid in state at around 10 am but earlier, relatives and other associates were still allowed to view the body.

Ng’oma, a former State House Chief of Staff, had a long political association with the late president which dates back to the late 1990s when the two formed the now disbanded United Party (UP).

He was visibly in a bundle of emotions, tears flooding his cheeks as he walked dejectedly back to his seat after bowing in respect to the late president.

As they day grew, people from different areas across the city, and beyond went to the New State House to view Mutharika’s body.