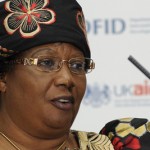 Banda was elected on Mutharika’s ticket as vice-president for the Southern African country in 2009 but they then fell out over Mutharika’s attempt to install his brother as his presidential successor. Following 78-year-old Mutharika’s death, his supporters tried to block her succession but she beat them off and since her accession she has been removing Mutharika’s appointees, including police chief Peter Mukhito, responsible for creating a climate of fear including arbitrary arrests and the shooting dead of 19 people during anti-government protests last year.

Mukhito’s removal in particular has created expectations of positive change in a country widely seen as sliding into authoritarianism and economic chaos.

Undule Mwakasungula, executive director of the Centre for Human Rights and Rehabilitation, told The Guardian:

Mwakasungula had been among many civil society leaders driven underground because of police actions following protests against increasing authoritarianism, including actions against the country’s independent media as well as the country’s deteriorating economy, which has seen severe fuel, food staple and foreign exchange shortages.

I think there will be many politicians who follow [that she will replace]. She needs people who will help her vision move forward. She’s coming in with the country in a very difficult position politically and economically. We need to have a collective vision to make sure the country comes back to the position where it was.

Banda has already signaled that she will pursue corruption under the previous regime.

Economic mismanagement and governance issues cost Malawi foreign aid, which makes up much of the government’s budget in one of Africa’s poorest countries. Restoring relations with donors, especially Malawi’s biggest, the UK, will be another of her priorities.

“It is impressive to see a peaceful transition like this one. Speaking as an outsider, it’s not easy to achieve what Malawi has done … she will get tremendous support from us to help the country’s economic recovery.”

“I am personally committed to ensuring that the government of Malawi addresses issues that negatively affected our relations with donors,” Banda said.

“My government is committed to restoring the rule of law, respect for human rights and freedoms and demonstrating good economic governance, starting with making sure Malawi has a programme with the International Monetary Fund.”

62-year-old Banda has a Bachelor of Arts Degree in Early Childhood Education from Columbus University and a Diploma in Management. She was 25 when she was living in Nairobi, Kenya, and had three children and an abusive marriage. Leaving that marriage was inspired by the growing Kenyan women’s movement. She then started a successful clothing business.

Moving home, she started the National Association of Business Women in Malawi, now a network of 30,000 women, as well as many grassroots projects with women, for which she has won a number of international awards. She was elected to parliament in 2004 and has held a number of ministerial posts including Foreign Minister. Her legislative achievements include laws on child abuse and domestic violence.