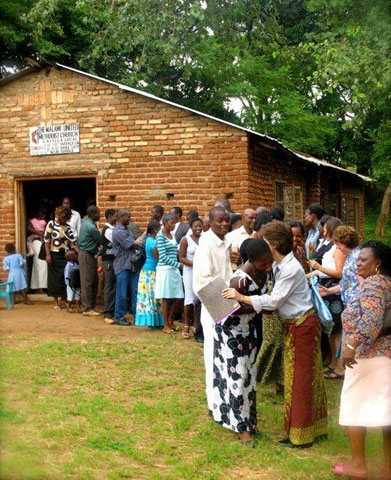 The Malawi United Methodist Church (MUMC) has embarked on relief programs to flood and drought victims to 1209 families in the rural areas of Nsanje, Zomba and Blantyre.
On February 18 the church distributed 328 bags of maize to flood victims of Tradition Authority Mlolo in Nsanje.

Speaking at the donation, the church’s Health Coordinator, Mercy Nyirongo said the aid funded by partners of the United Methodist from Church of Resurrection in Kansas City of United States symbolize their concern as church on how people are suffering due to the disasters.

“As a faith community we are touched to see that our friends are in trouble then we wish to share with them the little we have in order to maintain their health,” said Nyirongo.

Commenting on the issue, Nsanje District Natural Disaster Risk Management Officer, Humphrey Magalasi paid a vote of thanks to the church and emphasized that it is the second church to support flood victims in the districts after Salvation Army.

Some of the beneficiaries receiving maize bags
Following the program in Nsanje, the UMC went to the Eastern Region of Malawi in Zomba District to donate 581 bags of maize to drought victims on February 24 under the sponsorship of COR. This took place at Chikomwe primary school in Mayaka village.

In the opening remarks at the occasion, Traditional Authority Kwerewo appreciated the church for the donation and assured that it will help to minimize malnutrition diseases which were reaching at the rampant stage due to lack of food in the district.

He also commented that the Church has shown its love to people by distributing such help to the community where the majority is Muslims.

“We have learnt to love one another from the church by avoiding discrimination on religion,” said the chief whose accent sounds to be a Muslim.

Melvin Mponda, one of the recipients of the donation in Blantyre said the aid has saved her family from hunger in her family because she fails to grow crops since she is disabled.
In the related developments, the church distributed 300 bags of maize in areas of Traditional Authority Kunthembwe, Chigaru and Kuntaja on March 29, in Blantyre District to the elderly, orphans and the disabled.

Elders cerebrating after receiving maize at Kunthembwe village
This is where the maize did not grow well due to severe drought attacked in November and December last year.

Traditional Authority Kunthembwe popularly known as gogo Chalo said the church is a pillar of love, unity and peace in the country and this shows that God’s miracles are there for them to testify on the food aid given to his area.

He appreciated the church and its partners for considering his community in the relief program which has come in time when many families are living without food.

The Malawi United Methodist Church has been involved in different development activities in the country especially in health project by establishing under five clinics in Nancholi and Madisi as one of its priorities to improve health on its mission of Making Disciples of Jesus Christ for the transformation of the world.