The death of President Bingu wa Mutharika early this month has not only robbed Malawi of its leader but also deprived Africa of a fearless campaigner for deeper regional integration and agrarian revolution. 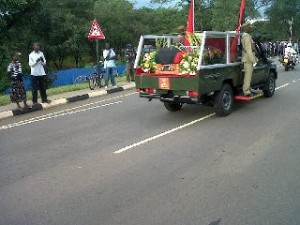 Mutharika, who died on 5 April due to a heart failure, played an instrumental role in southern Africa’s efforts to transform the region from a food-deficit area to one producing surplus grain.

Doubling as Malawi’s Agriculture Minister, Mutharika introduced a grain subsidy programme in 2005 to increase the provision of maize seed and fertilizer to smallholder farmers by more than 75 percent.

In addition, the average farmer’s yield increased to two metric tonnes per hectare from 0.8 metric tonnes in 2005 as government provided vouchers to farmers to buy appropriate inputs.

Despite widespread criticism by economists and multilateral agencies who argued that the expansion of subsidies would worsen Malawi’s budget deficit and create distortions in the market, wa Mutharika stood by his programme to ensure that low-income farmers are empowered.

Recent successes in turning around the agricultural sector and ensuring food security for the country have confounded critics. In fact, the significant increase in production has saved Malawi more than US$120 million annually that it could otherwise have spent on food imports.

As chair of the African Union in 2010, Mutharika urged member states to invest heavily in the construction of infrastructure such as food storage facilities, roads and railway to support their food security programmes.

He proposed a road map for Africa to achieve sustainability in food security, which essentially advocated for a new partnership among African nations.

His strategy involved improving agriculture and food security on the continent through interventions such as subsidies to smallholder farmers, improvements in irrigation, increased budgetary allocations, private sector investment and affordable information and communications technology.

These included a zero-tolerance policy on corruption and fiscal indiscipline, resulting in the country experiencing economic growth each year and keeping its inflation rate within the single digit mark.

However, wa Mutharika’s good track record during his first term in office was quickly forgotten in 2010 when he refused to be bullied by Britain and invited the wrath of Malawi’s former colonial ruler by expelling the British high commissioner.

For routinely standing his ground against Western powers, wa Mutharika was labelled an intolerant and autocratic leader whose government became a target of external regime change agents.

Donors responded by withdrawing their support to the country and making governance rather difficult.

Newly appointed Malawi President Joyce Banda is faced with a daunting task to restore stability in the country.

Banda – the first women president in southern Africa and the continent’s second after President Ellen Johnson Sirleaf of Liberia – needs to improve Malawi’s economic performance by improving the availability of basic commodities and restoring relations with development partners.

Other challenges facing Banda in her new post include how to deal with outside interference, particularly from the West and some of the multilateral financial institutions such as the International Monetary Fund (IMF).

The IMF has for example, recommended that Malawi first devalues its currency, the Kwacha, before the institution could resume its programme in the country. However, history has shown that the devaluation of currencies does not usually benefit the poor and instead pushes them deeper into poverty.

She will also be expected to deal with pressure from development partners who have linked their assistance to alleged respect for human rights of lesbian, gay, bisexual and transgender people and the right to freedom of the press.

In her acceptance speech during her inauguration, Banda called on all Malawians to work together in rebuilding the country, especially during this difficult time as it mourns its leader.

“I want all of us to move into the future with hope and with that spirit of oneness and unity. I just sincerely hope that there is no room for revenge and that we shall stand united,” she said.

She is Malawi’s fourth president since the country’s independence in 1964. Her predecessors are Kamuzu Banda, Bakili Muluzi and wa Mutharika.

She is the founder and leader of the People’s Party which was formed in 2011.