Bad laws should not be removed so quickly – DPP

Leader of Democratic Progressive Party (DPP) in Parliament George Chaponda on Tuesday slammed the policies of President Joyce Banda and some of the hasty decisions she is making without following proper procedures. 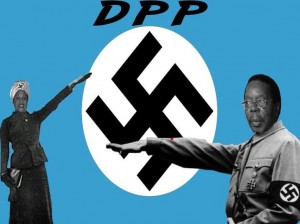 Commenting on Banda’s speech made during the opening of the budget meeting of parliament last Friday, Chaponda, among others, faulted the way the current regime handled the devaluation issue and the proposed repealing of some laws.

He said although Banda said she will complete the programmes started by the DPP regime, he said it is surprising that some things are being done without following the law.

He also faulted the way government handled the issue of the recent devaluation.

“First, his Government made an untimely announcement of the then impending devaluation. This sent shock-waves across the country and some shrewd businessmen hoarded their goods awaiting the devaluation,” Chaponda observed.

He said government has also not done much in helping people to withstand effects of the devaluation.

“Devaluation was done without taking into account the safety nets which the Bingu administration took pains to negotiate with the IMF in order to avoid negative impact of the devaluation on the common person in the rural area.

“As we are aware, there is already great suffering of the people in the rural areas and one does not even find forex which was being promised….One painful statement in all this, is the statement by the government through the Reserve Bank, ‘that workers should not expect a pay rise but endure’,” Chaponda said.

Chaponda also expressed his party’s disappointment on the way Banda’s much touted Government of National Unity (GNU) was formed.

“Another indication that this Government has no respect for good governance is the manner in which the so-called GNU was established. As we are aware, when the government is establishing a GNU, there is need to engage in a dialogue with the relevant parties concerned.

“The manner in which this is being pursued however, quite clearly aims at establishing a one party state. We are determined to resist. We were shocked, for instance, that our Leader of Opposition has declared that he does not intend to oppose the government in any way,” Chaponda said.

He did not even smile with the fact that government has abandoned the ‘Zero Deficit Budget’, saying the best thing the government could do was to see how it could be improved.

“What was required was to take advantage of the new developments but at the same time improve on the Zero Deficit Budget, as the desire of any country after attaining political independence is at one time or another to also achieve economic independence.

“By abandoning this Bingu initiative, this new government has once again shown its inability to pursue issues which would bring us towards achieving economic independence,” Chaponda said.

Chaponda also urged Banda to make sure that the committees she has established, to investigate some issues, like one relating to transition after death of former president Bingu wa Mutharika, are not used as instruments of retribution.

“We are making such conclusion judging for example, from what the President has been informed to have been done by the so called mid-night six coup plotters…….. it is our hope that the Committee established to investigate this matter will be independent and come out with objective findings and will not be used as an instrument for impunity or retribution,” Chaponda said.

However Finance Minister Ken Lipenga blamed the DPP regime on the problems relating to the recent devaluation.

On remarks regarding Leader of Opposition John Tembo’s approach to issues the government introduces, MCP legislator for Lilongwe Msozi South Vitus Dzoole Mwale said nothing worth opposing has been done so far. He said MCP will oppose when issues worth opposing come out.