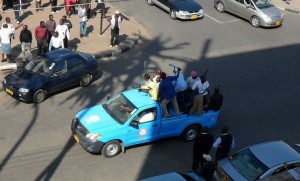 But Mulli, who is chief executive officer of conglomerate MBL Holdings, formerly Mulli Brothers, on Thursday denied sponsoring any efforts to frustrate the demonstrations.

In an interview on Wednesday, MHRC outgoing chairperson John Kapito said the commission will drag to court all the people who have been implicated in their investigative report, recently submitted to President Joyce Banda.

“The allegation on Mulli is coming in as a result of the injunction which Charles Kanyoza and his group obtained to stop the demonstrations.

“He is also coming in because of the press conference which was organised to threaten that if CSOs proceed with demonstrations, their group would also organise counter demonstrations,” said Kapito.

Kanyoza was at the centre of efforts to organise a pro-government demonstration during July 20.

“There have also been reports alleging that Mr. Mulli was behind the sponsorship of government’s counter CSO demonstrations,” reads the report in part.

Kapito claimed Mulli turned down the request to respond to the claims when the commission was investigating the matter.

“We went through his brother, Felton Mulli, but he told us that he couldn’t meet us. Mind you most people at that time were behaving as if they were above the law and refused to meet us.

“That report has gone to many people, including civil society organisations. The report compiles all allegations that were made during our investigation. We are hoping to get more information when the courts start hearing these things,” he said.

Kapito said the commission is already working to prosecute former Inspector General of Police Peter Mukhito and other senior police officers for allegedly issuing orders to their juniors to kill civilian protesters.

Mulli on Thursday denied sponsoring any efforts to frustrate the demonstrations, demanding that the commission produce evidence proving that he funded efforts to counter the protests.

Said Mulli: “Anybody can say anything. If they have grounds, they must prove that by giving evidence. They must not bring politics in these things. I am not and have never been a partner with Kanyoza.

“KAMU is owned by Charles Kanyoza and you can check that with the registrar of companies. I was not there at the press conference and my name is not part of the injunction that was obtained against the demonstrations.”

He said he will challenge the allegations when the matter goes to court, adding he lost property amounting to about K500 million during the demonstrations.

Mulli, who was a big supporter and financier of the late Mutharika’s DPP, is one of the people who lost millions in property damage during the July 20 protests. His Sunrise Pharmaceuticals and Chombe Tea Company in Lilongwe were looted by angry protesters. Further to that, two buses for National Bus Company, where he is a director, were also torched.

Despite failing to capture values of other lost properties, MHRC report shows that property worth over K200 million was lost during the protests.

“The pattern of the attacks on property shows that most of the people whose property was targeted were believed to have a strong link to the government. A warehouse belonging to Mulli Brothers was looted and destroyed,” reads the report in part.

Other notable persons who lost property during the demonstrations include former Sports minister Symon Vuwa Kaunda whose Lilongwe Auctioneers and Estate Agents Company was looted and burnt.

Activists claimed the late-hour injunctions against the demonstration stirred violence during the protests against Mutharika’s deteriorating stand on human rights, political and economic governance.

The report has also documented how police “cruelly” shot at protesters during the demonstrations.

It shows several cases where police officers randomly shot at unarmed civilians on July 20 and 21.

It has also named some police officers who allegedly shot at the protesters.

MHRC outgoing chairperson John Kapito on Thursday said the commission will prosecute police officers and their seniors implicated in the shooting.

“When we talked to the police officers, they said that they were operating on orders from above, that’s why we will even drag to court the Inspector General and other senior police officers in the service,” said Kapito.

Apart from the MHRC’s inquiry, Mutharika also instituted a commission of inquiry which was given eight months from October last year to probe events surrounding July 20 demonstrations.

The commission is yet to submit its report to the President, according to its chairperson Apostle Timothy Khoviwa.