The Catholic Church in Malawi has said its faithful are free to take part in lotteries but that no church structures should be used.

This is part of the resolutions made during the second Annual Plenary Meeting of the Episcopal Conference of Malawi held in Lilongwe last week. 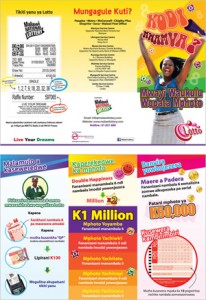 The statement signed by Episcopal Conference of Malawi Secretary General Father George Buleya, says many of its faithful have been seeking its guidance on the phenomena of lotteries in Malawi

On the matter, the Conference resolved that Catholics are free to participate in lotteries provided their decisions do not adversely affect other crucial responsibilities.

Furthermore, the delegates to the Conference agreed that money gained in these lotteries is put to what they called ‘good causes’. No clarification has been made to what was meant by ‘good causes’.

According to the Statement, the Conference also resolved that Church administrative and worship structures should not be involved in lottery activities, either in running or administration of lotteries.

Lately Malawi has witnessed a proliferation of lotteries run by either religious or secular institutions.

Some of these organisations promise lottery winners either cash or trips to distant places including trips to the Holy Land of Jerusalem.

Previous articleBig Brother: Three girls booted out as Wati seeks solutions to getting more votes
Next articleMulli dancing to his own music as Sheriffs seize vehicles over debts

A sad report that is currently making waves on...
FaceofMalawiNEWS