UDF cannot officially respond to bills and any other statements in Parliament as they are part of government, Speaker Henry Chimunthu Banda has said. 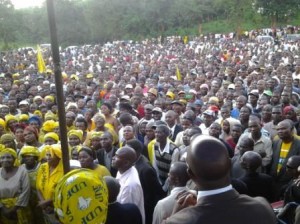 Chimunthu Banda said this in his determination on Thursday after Salima North MP Canaan Kaphamtengo Yona asked the Speaker to clarify what type of government Malawi has after noting that UDF did not respond to bills and statements.

Chimunthu Banda gave the ruling in the morning to an almost empty chamber as most members, especially on government benches and Cabinet ministers, absented themselves. There were only 65 out of about 105 members.

“Though the matter on who could respond arguably is not clarified in the standing orders, I indicated that it is not the matter for the Speaker to define the type of government. But from practice, I have come up with a ruling,” said Chimunthu Banda.

He cited the case of October 1994 when the Alliance for Democracy (Aford) and UDF entered into a coalition government, Aford indicated that those that joined the Cabinet would sit with government while as a bloc, they would continue to sit as the opposition.

“Aford sat as a bloc and had a leader and deputy leader. The UDF wrote to the Speaker on 21st May 2012 that they will be sitting on government benches. The UDF, in this case, will be advancing the views of government and cannot have spokespersons or respond as an opposition party,” said Chimunthu Banda as DPP benches shouted ‘UDF yatha.’

UDF chief whip Clement Chiwaya and most of his party members were absent as the Speaker delivered his ruling.