There was panic at Dzenza secondary school in Lilongwe on Wednesday when fire gutted girls’ hostel, destroying property for over 70 students some of them sitting for junior certificate of education examinations.

School Head Teacher Mr Pascal Chitundu said no injuries were recorded but several property belonging to the students was burnt to ashes. 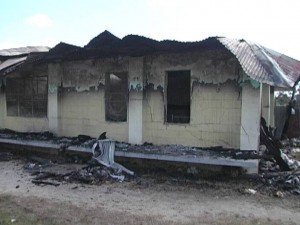 “The fire started around 9 am on Wednesday. It was spotted by one student who forgot her textbooks at the hostel. We tried to do all we could to put the fire off but it was too little, too late,” said Chitundu.

Mr. Chitundu expressed worry that the incident will demoralize some of the affected students who are currently writing examinations.

The police are meanwhile assessing the extent of the damage.

What now remains of the blocks affected are burnt tattered mattresses, exercise books and suitcases scattered all over the place.

The school’s head teacher, Mr. Pascal Chitundu, says the incident has thrown the school into disarray.

“Right now, the students are completely distraught with the fire accident, and personally, am utterly shocked to the bone,” says the Chitundu.”Right now we’ve sent teachers to counsel the affected students.”

“I think we will have to send some of the students home, particularly in forms one and three to create room for the forms twos and forms, since the form two are currently writing exams while the form four will be writing their exams shortly,” says the education official.

Now, the head teacher is appealing for support for the affected students.

“Most of these students have lost everything, except what they were putting on when the fire was ragging,” he says.

Prostate cancer is a leading cause of death in...
FaceofMalawiNEWS