Finance Minister Ken Lipenga on Friday tabled a K406 billion (about $1.6 billion) 2012/13 national budget which, although it provides lukewarm tax relief and some safety net initiatives, appears too timid to make much of a difference in cushioning the poor from the effects of the 49 percent devaluation of the Malawi kwacha. 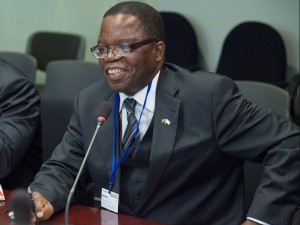 The strong free-market principles around which this budget is built have the all-powerful hands of the International Monetary Fund (IMF) palmed all over it, with the World Bank soothing its sister institution’s arm-twisting with some support for a limited safety net programme.

Call it the good cop and bad cop strategy, if you will.

The IMF’s hand is seen in the so-called market-based approaches to pricing of strategic commodities and utilities.

The new policy on adjustment of fuel and utility prices to reflect full cost recovery makes economic sense, but coming at a time Malawians are already hurting, it sounds out of touch.

“Mr. Speaker, Sir, subsidies on fuel and electricity are very expensive. In the past, fuel prices did not reflect cost-recovery levels. The price build-up for fuel was based on a ‘deemed price’, which was always significantly lower than its in-bond landed cost.”

But considering that the average speed at which prices will rise (inflation rate) is projected to average 18.4 percent this year, the highest in at least seven years, this everyone-for-themselves-policy could be a recipe for disaster as the cost of living heads to astronomical levels.

And considering the volatility of global oil prices in recent years owing to geopolitics, terrorism and unpredictable economic data from major economic powers, among other factors, it is interesting to see how macro-economic stability, as defined by Lipenga, can be achieved in the absence of central government hands to steady fuel prices whenever deemed fit.

But given the fiscal wreak the Joyce Banda administration inherited from the late Bingu wa Mutharika-led government; Lipenga had little wiggle room for manoeuvre at a time of sensitive negotiations for a new economic programme with the IMF.

Cleaning up the mess

Thus, Lipenga is now forced, in his maiden budget, to prioritise cleaning up of the previous year’s fiscal mess that is characterised by a heap of wasteful spending at the expense of providing widely expected relief to the masses.

Total revenue and grants during 2011/12 were K260.2 billion, thereby creating an overall fiscal deficit of about K70.05 billion or 7.3 percent of gross domestic product (GDP) which, as Lipenga admitted, is the largest in recent history.

The 2011/12 zero-deficit budget (ZDB) planned for a deficit of just 1.5 percent of GDP but missed the target wide after the ZDB experiment exploded.

The above budget spending was financed through local borrowing from the public (mainly treasury bills and bonds and by instructing the Reserve Bank of Malawi (RBM) to print more money)—all of which pushed the domestic stock to K192.37 billion or 16 percent of GDP and has contributed to the current double digit inflation.

All this will weigh heavily on the budget that it has made meaningful tax cuts tough for the new People’s Party (PP) administration.

Thus, while total revenue and grants are projected to jump from K260 billion last year to K394.47 billion in 2012/2013, reaching this target could be a tall order. Granted, donor aid will be flowing, but tax revenue in a depressed economy, will be rough.

Moreover, over and above the domestic debt stock, government also has to settle arrears in excess of K72 billion accumulated by both government departments and parastatals, which puts a lot of pressure on the public purse.

. Cellphone companies as their corporate tax has risen from 30 percent to 33 percent

. Imbibers as duty of alcohol in sachets and plastic bottles has been increased from 150% to 250%

.Companies as minimum tax on turnover has been removed

. Shareholders’ taxes on gains from sale of shares that are held for more than one year removed

. Pensioners as benefits that accrue to them will be

. Importers of machinery as VAT has been removed

. Account holders as VAT on financial services has been removed

. Information seekers as VAT has been removed

on newspapers and Internet services

. Consumers of bread as VAT on it has been removed.

and textiles has been removed

. Returning residents as they will be allowed to clear duty-free motor vehicles for personal use if owned not less than 12 months.

. Large bus owners as all taxes on big 45 plus-seater buses have been removed