More than 200 families in village headman Chinkhota 1 under Traditional Authority Chitukula in Lilongwe district believe they have been cheated big time.

Two years ago, the villagers were forced to sell their land, which has resulted into hunger while their 117 acres farmland, once the bread basket of the area, has been rendered useless as it was allocated to a failed project by American pop idol Madonna.

The project in question is the multi-million girls’ academy which never materialised.

The community is now counting the losses of a project that started with a lot of promise but ended sadly as currently the people have no land to cultivate crops.

The media has also learnt that government officials allegedly pocketed millions of kwacha over the impoverished community by inflating figures in the process of compensation.

A visit by the media to the area last weekend found villagers furious at the way the saga has unfolded, leaving village headman Chinkhota 1 to deal with the aftermath alone.

“Since the land was taken away from us, when government officials from Lilongwe led by a Mr. Mwenda, we have had to put up with a hoard of problems.

“We were cheated on the issue of compensation while our land was sacrificed because we were told if we did not release it government would take it anyway without compensation. This left the villagers with no choice.

“In fact, the Anti-Corruption Bureau (ACB) showed us evidence in 2010 that we were indeed short-changed when they brought a cash register showing inflated figures,” said Chinkhota.

Chinkhota claimed ACB officials declared the underpayment when it was revealed that those who got K40,000 were supposed to get K280,000 while villagers who received K80,000 would have walked home with K480,000.

Visible signs of desolation and abject poverty were evident as empty maize barns were seen during our tour while the land remained graded and graveled rendering it unsuitable for farming.

Chinkhota 1 says he regrets the decision to bring to his area a project that has left his subjects landless their land was taken up by Madonna’s Raising Malawi Project.

Last year, the pop star announced that she will no longer build the multi-million dollar girls academy she promised.

But despite the villagers pointing fingers at the Lilongwe District Council as the architects of the problem, District Commissioner Paul Kalilombe blamed it on the confusion that ensued at the beginning of the project.

“The process was done in a transparent manner as all key stakeholders including the villagers were briefed on the exercise,” said Kalilombe.

“The villagers might have felt aggrieved and cheated because initially procedures were not followed. Raising Malawi initially dealt with the villagers directly and the prices quoted for the land were indeed relatively higher.”

But Kalilombe said upon the realization that the land was part of the city planning area thus under the jurisdiction of government, the Department of Lands was involved in the assessment together with the council and other stakeholders.

“It is true that the figures calculated using government guidelines were not in tandem with what the villagers had quoted Raising Malawi earlier. ACB took up the matter but we have not had any feedback on the progress nor the results of the investigation. No council officials have been charged or convicted.

“To make it clear, it was the Department of Lands that came up with the figures and not Lilongwe District Council,” he added.

According to Kalilombe, K22 million was dispensed in compensation to the villagers, although some gave up their land for free.

Kalilombe also acknowledged the food problems saying government, through the council will assist those that are food insecure once assessments are conducted.

He ruled out the possibility of the people getting back the land.

“In agreeing to receive compensation, the villagers waived their rights to the land and a lease document was issued in favour of Raising Malawi. It was assumed that the compensation would be used to acquire alternative land or a means of survival for the villagers,” he said.

When contacted, the ACB said it had concluded its investigations.

“Indeed ACB commenced and concluded investigations into the matter. The file at the moment is with the Bureau’s Prosecutions and Legal Section for them to issue a legal opinion on the investigations team’s findings and recommendations,” said Egrita Ndala, the bureau’s senior public relations officer.

“The Bureau cannot divulge the findings of the investigations at this point as the information is not yet in the public domain. Suffice to say that the matter is being given required attention by the Anti-Corruption Bureau,” she said.

Raising Malawi officials, whose charity organisation was founded by Madonna and Micheal Berg in 2006, could not be reached for comment.

Madonna, through her organisation, started working on the site and are said to have spent US$3.8 million (about K1 billion) in 2010. The launch took place in 2011. 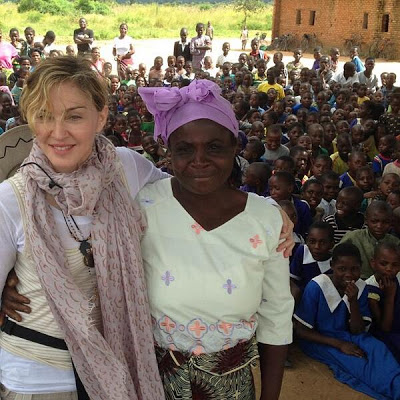