Renowned dancer Sam Mphande, known in the entertainment cycles as ‘Atoti Too Short’, was on Saturday assaulted by two security personnel at a musical show in Ndirande, Blantyre leaving him unconscious and left for dead.

Atoti is reported to have fainted for hours and was rushed to Queen Elizabeth Central Hospital, where he has been hospitalized in ward 5A.

As of yesterday, reports were rife in Ndirande that the dancer, who has dazzled many with his dancing antics, is ‘dead.’

However, it transpired that Atoti was not ‘dead,’ but rather was severely injured and fainted before regaining consciousness later.

Atoti speaking from his hospital bed yesterday said he was in great pain after being assaulted for no apparent reason.

“I am lucky to be alive; I fainted and only realized I was in hospital. A bouncer by the name of Damiano and another person beat me up. They were asked for money but I told them I didn’t have and that’s when they pounced on me,” he said.

His grandmother, who is his guardian, said he was put on oxygen on arrival.

Doctors information on his sheet, indicate that he was assaulted at a musical show by unknown man who lifted him up by the neck and struck him on the floor.

It also indicates that he has severe head injuries.

According to eye witnesses, Atoti is said to have been beaten after he jumped on stage to back up musician Moses Makawa.

“Atoti first spiced up Thomas Chibade’s performance and then he came back on stage to spice up Moses Makawa’s performance. It is believed that he was told to move out of the stage as Makawa had backing team already. He was refusing to go off stage that’s when he was beaten by the bouncer,” said one eye witness.

A police officer at Ndirande confirmed the incident adding that the man is currently in police custody. 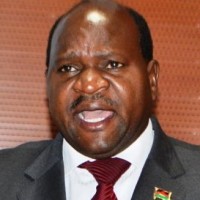