Malawi’s women stand up for healthcare rights under HIV/AIDS

Out of the 34 million people living worldwide with AIDS, a large proportion, approximately 61,000 orphans, are living without parents in Malawi, due to AIDS related deaths.

The antiretroviral treatment (ART) that is currently and widely used in Malawi for HIV positive women is D4T. But advocates inside Malawi say that HIV+ women are being “poisoned” by the treatment.

For women across the African nation of Malawi, the new appointment of President Joyce Banda is an exciting indicator of change.

With President Banda’s history as an advocate, rural African women often caught in the cycle of severe poverty and hardship hope that this new president will be a sympathetic ally in the fight for women, and their families, to receive greater access to education, healthcare, opportunity and human rights.

The treatment of HIV and AIDS related illness is showing global advances and improvement. UNAIDS has revealed that 34 million people worldwide, including children, are now living, and surviving, with AIDS. This figure is up from the 29.4 million documented cases of survival with AIDS in 2001.

But out of the 34 million people living worldwide with AIDS, a large proportion, approximately 61,000 orphans, are living without parents in Malawi, due to AIDS related deaths.

The antiretroviral  treatment (ART) that is currently and widely used in Malawi for HIV positive women is D4T.  But advocates inside Malawi say that HIV+ women are being “poisoned” by the treatment which contains stavudine, a highly toxic drug that can cause fatal lactic acidosis, especially for pregnant women. Lactic acidosis is a condition that can cause the bloodstream to become too inundated with lactic acid crowding out oxygen in the blood that can result in death.

Stavudine can also cause severe and fatal pancreatitis when combined without proper management with other HIV/AIDS treatments. An often dismissed impact with the drug shows that stavudine can also disfigure a woman’s body, as well as cause episodes of peripheral neuropathy.

Other side effects for the drug can also produce changes in a woman’s body that include severe belly swelling (as if pregnant), and severe loss of fat on the face, arms, legs and buttocks.  Women are often more likely to suffer more stigma and discrimination than men under these conditions as the drug causes visible physical changes and disfigurements impacting a Malawian women’s sense of beauty, fertility and sexuality.

“Even men, they will say that they don’t want wives who have no buttocks and misshapen bodies like ours,” shares Malawian HIV/AIDS activist Esnat Mbandambanda.

To improve HIV/AIDS healthcare in the region, President Banda’s government has pledged to roll-out distribution of a new antiretroviral (ARV) drug – tenofovir disoproxil  fumarate – recommended by the World Health Organization as a therapy that may prevent the onset of HIV.

Tenofovir is set to be made available for all Malawians sometime during 2013. But advocates inside the region are cautious about ‘easy’ claims made by the government for new and improved health treatments.

Even though the government did receive 350 million dollars in USD funding from the United States last summer to invest further in energy solutions for the region, Malawi actually may not have the resources available to fully support a sustained regimen of change in the treatment of HIV/AIDS. The ‘new’ tenofovir drug therapy, while it may be more effective, is also more expensive.

Tenofovir therapy does have its own set of side effects, although they are considered better than other drug therapies for HIV patients. Use of tenofovir in some cases may prove lethal to some patients as any lack of strict adherence in taking the drug may result in immunity against the drug’s effectiveness, which might prove fatal in mismanaged cases of HIV/AIDS.

“If we campaign for better ARVs, will the government sustain that regimen? What are we as Malawians supposed to do?” asks Malawian women’s human rights activist Ms. Sibongile Chibwe.

This decades long viral epidemic has also caused many changes in African rural communities as well as urban areas, especially in Malawi where stigma and persecution follows those who are diagnosed HIV+.

“The HIV/AIDS epidemic has had a debilitating impact across the country,” says the 2011 report by UNAIDS. “The Malawian government estimates that 924,800 of its citizens are living with HIV/AIDS, 57% of whom are women.”

In the search for progress in Malawi women are now organizing to claim their rights to better health and a better life.  Global advocates JASS -Just Associates along with local partners inside Malawi, including the MANERELA+ – Malawi Network of Religious Leaders Living With and Affected by HIV/AIDS and community-based organization WOFAD – Women for Fair Development are working together to build a strategy to “prioritize women’s needs.”

For the past four years, JASS has supported women activists and leaders to tackle issues that include HIV/AIDS treatment and its affect on women, including women’s bodies. The organization has worked to give women a ‘safe space’ to speak out about their needs and concerns in treatments.

“…I have found my voice, my power within and am able to use my voice on all the issues that affect women in my community,” says Kwangu Tembo Makhuwira, from COWHLA – Coalition of Women Living with HIV/AIDs, after she became a member of the program organized by JASS. 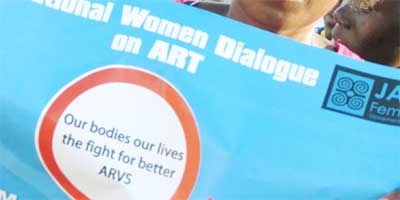 Mobilizing at the community level

With an almost 2 hour drive east from Malawi’s urban capital city of 8888, the town of Chipoka has a medical facility clinic that serves the community’s HIV patients . In the past those who visited the clinic on Thursdays were sometimes told they cannot get their antiretroviral meds until the following Tuesday. Why?  Because there were no medical staff there working to keep the clinic open throughout the entire week.

Asking patients to return for meds the following Tuesday meant that they would skip their prescribed and ‘life-saving’ HIV med regimen for six days.

The women of COWHLA recognized that denying access to these medicines could impact the health of HIV patients, especially the majority of patients who are women. To help solve the problem COWHLA decided to use their collective power to do something to ensure that HIV+ women were able to access their full treatments.

“We [at COWHLA] knew our rights..and used our collective power…that’s why we took it in our hands to demand the access to ARVs [antiretrovirals],” says Makhuwira.

”If we hadn’t known, the women could have gone home without medication.

But we knew that if we didn’t get a satisfactory answer at the health center, we could…identify who we could go to, to get help…[and] ensure our voices were heard,” she continued.

For many rural Malawian women, the struggle for antiretroviral treatment is deeply connected to women’s participation in decision-making at local levels. Empowering women to take charge of their own healthcare has helped to challenge inequality and discrimination by leveraging power for women with local Malawian chiefs and district-level leaders.

Activist and leader Ms. Tiwonge Gondwe affirms this in her experience as local chiefs come to the negotiating table with women in order to promote change.

Movement building as a solution to injustice does not come without challenges, says local advocates who work to help those with HIV/AIDS in the region.  It takes time, energy, strategic thinking and an awareness that the system will fight back again and again, they continue.

“The neglect and marginalization of women’s needs and circumstances in the context of HIV and AIDS is not simply a poor health and policy issue it is a violation of women’s rights,” adds Grace Malera from the Malawi Human Rights Commission.

The ‘Global Race to SAVE Lives Conference’, launched in October 2012, has now begun a national dialogue in Malawi with over 160 women activists, advocates and group leaders to debate the issues and needs facing HIV+ women throughout the region. The work to encourage the newest treatments available for women suffering from HIV/AIDS and to discontinue stavudine D4T treatment is part of ongoing discussions. Included in this important debate are Malawi’s national Ministry of Health, President Joyce Banda and the international aid community.

“We are going to challenge the government to make a policy to ensure a sustainable ART [antiretroviral treatment] regimen regardless of whether donors are here or not.

And we also need the government to make sure that [HIV] positive women have their own resources like savings loans and fertilizers [for farming].

With solidarity, hope, and a shared vision of the future, Malawian women advocates and organizations are working to bring the kind of critical consciousness that allows women to reflect on their lives as they nurture what activists call “a power within.”