For more than 20 years, the Malawi Congress Party (MCP) has had no chance of winning presidential elections. This bad luck could change in 2014. Peter Mutharika and Joyce Banda are certainly heavy contenders for the presidency. But if MCP chooses Lazarus Chakwera, he may be the man to beat.

MCP is the only truly nationwide party in the country. It is the only party with a branch in almost every village. Those branches, now almost dormant, can spring back to life if a new charismatic leader comes along to lead the party. The only person capable of doing that at the moment is Chakwera. He commands trust of a spiritual leader in a deeply religious country. And having been president of a church for 10 years, he is well known to each of those myriad of churches scattered in every village across the country. Combining the strength of an extensive party network with that of a popular church network may be the tsunami which even the state controlled media may fail to stop.

Is he going to win the presidency? Nobody knows. The answer will, to a large extent, depend on how well Mutharika and Banda do their homework.

As president of the governing party, Banda has a reasonable chance of retaining the seat in 2014. History is largely on her side. In southern Africa, ruling parties have won the majority of presidential elections. Governments tend to have a huge platform in elections. Bandaâ€™s strongest point is that she is the preferred candidate of our traditional sponsors abroad. Such support could be crucial in bringing in the much needed money for campaign or moral support in case of disputed election results.

Unfortunately, Joyceâ€™s strong point is also her weakness. She is seen as too much controlled by outsiders. Recent history in our neighboring countries â€“ Zambia and Kenya and new developments in Zimbabwe â€“ have shown that the region is once again electing liberation movement type of leaders. Joyce Banda is not that type.

In trying to look appealing to her friends abroad she has followed their advice wholesale sometimes at the expense of the local Malawians. Things are barely improving in the country; and whenever hardship abound voters have a tendency to punish the incumbent. Banda is also increasingly seen as a weak leader as Tanzaniaâ€™s bluster on Lake Malawi dispute grow louder and louder. These factors will surely bring smiles on faces of her challengers as 2014 approaches.

Peter Mutharika will be forgiven to think he is the leader in waiting. There is a good reason for that; he is probably the strongest contender to the seat as of today. DPP has been away just long enough for people to be nostalgic about them but then short enough for the party itself to still retain its strength. In Africa, the longer a party stays out of power the weaker it becomes. DPP has struck a good balance as of today.

However, Peter Mutharika will have to overcome a few challenges himself if he has to make it The radio and the TV will soon be controlled by the government. Mutharika will have to put a plan in place as to how he will counter that. He also needs to form a robust response committee to counter propaganda by friends of Joyce Banda in Malawi and abroad. The international community which has fallen in love with Banda is always looking for excuses to support her. Sometimes those excuses are manufactured. Mutharika will have to have a robust team that quickly refutes false allegations and exposes propaganda. In case of election cheating by government, DPP will have to be fast and thorough in providing the evidence to the world. The international community is more likely to look away in case of Bandaâ€™s cheating.

On the ground Mutharika will have to convince Malawians that he is his own man; that he can set new directions and is capable to managing the country. Most Malawians will remember the problems Ministries of Education and Foreign Affairs faced when Mutharika was in charge.

In any case, both Mutharika and Bandaâ€™s possible challenges pale in contrast to the trials and tribulations of the UDF. The once mighty UDF founded by Bakili Muluzi is now in the hands of his charismatic son, Atupele. Atupele is quite popular especially with the young. But as Atupele goes around the country campaigning, the elephant in the room remains the PP. The UDF and the PP share the same power base. In fact when Joyce was in the DPP, she was seen as a leader of the UDF wing of the DPP. There is no way both PP and UDF can do well in the same presidential elections. Their voters come from the same pot. This is a big problem for the UDF because in politics just like in boxing, if the contender is just as good as the champion, the champion gets to keep his belt. It is hard to see the UDFâ€™s path to the presidency while PP is in power.

Another interesting party is PETRA led by Kamuzu Chibambo. It has to be said that Kamuzu is one of the most innovative new leaders Malawi has. His case for the third liberation of Malawi was well received.

Some parties even started copying from it. But just like all the other opposition parties, Kamuzu will have to find a way of putting himself before the Malawian villagers. The national radio and TV stations will not do that for him. Facebook is not good enough either. He will have to find other ways to reach the villages where the goldmines of votes are located.

This is where Chakwera has an advantage. Government media will not be able to stop him. MCPâ€™s extensive party structure and his church brethren will be his media. Never underestimate the power of the church in Malawi. History would have been different today if the church did not play a strong role in the 1994 referendum.

Of course, this discussion is academic. There are many factors that are yet to show up on the ground that will throw the election in one direction or another â€“ the economy may improve tremendously or even crash; a new candidate more charismatic than any may yet arise; Mutharika may commit a big blunder along the way or Chakwera may turn out to be a very bad campaigner.
One thing we know for sure is that if the MCP chooses John Tembo as their candidate, they will throw away any 2014 chance they may have. After all, if a party can change its own constitution to allow their longtime leader to serve on, what will stop them from changing the constitution of the country for their own benefit. Malawians know better. 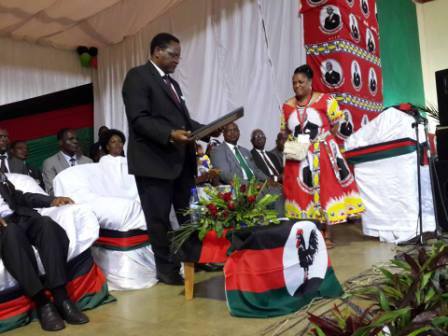 Chakwera to deliver a lecture at Chanco