THE sign language interpreter at the Mandela funeral who was branded a “fake” by the deaf community said he suffered a schizophrenic episode during the service.

In an interview with a South African newspaper, The Star , interpreter Thamsanqa Jantjie said he suddenly lost concentration, started hearing voices and hallucinating during the service – but he could not leave.

“There was nothing I could do. I was alone in a very dangerous situation. I tried to control myself and not show the world what was going on,” the 34-year-old said.

He said he did not know what caused the attack. It may have been the magnitude of the occasion, he said, or how happy he felt.

At the service Mr Jantjie stood signing alongside world leaders, including US President Barack Obama.

But multiple sign language experts said he was a fraud and his gestures signified nothing.

“I am very sorry, it’s the situation I found myself in,” he told the newspaper. “Life is unfair. This illness is unfair. Anyone who doesn’t understand this illness will think that I’m just making this up.”

Sign language experts said he was ‘a complete fraud’….

Sign language experts said he was ‘a complete fraud’.

Last night Bruno Druchen, the national director of the Deaf Federation of South Africa, told the Associated Press the interpreter “was moving his hands around but there was no meaning in what he used his hands for.”

“He wasn’t even doing anything, There was not one sign there. Nothing. He was literally flapping his arms around.”

Another sign language interpreter said it looked as if he was “trying to swat a few flies away from his face and his head”. 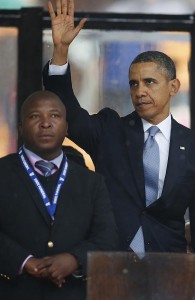 Mr Jantjie did describe his qualifications for being a sign language interpreter, but told The Star he works for an interpreting company that paid him $85 for interpreting Tuesday’s event.

Nicole Du Toit, another official sign language interpreter who also watched the broadcast, said in a telephone interview that the man on stage purporting to sign was an embarrassment.

“It was horrible, an absolute circus, really really bad,” she said. “Only he can understand those gestures.”

South African parliamentarian Wilma Newhoudt-Druchen, a deaf member of the ruling party, also said the man communicated nothing with his hand and arm movements.

Loening said her organisation was getting mail from around the world “wondering what on earth this man was doing there”.