Ronaldinho was stripped to his little cotton socks after playing for Atletico Mineiro in Thursday’s Club World Cup semi-final with Raja Casablanca.

Moroccan side Raja were surprise 3-1 winners in the game in Marrakech but it wasn’t a place in the final with Bayern Munich which got the home side excited.

No, instead it was the opportunity to rub shoulders with Brazil ace Ronaldinho and get hold of a souvenir.

And, not content with his shirt, the Raja players surrounded the former world player of the year and gave him plenty of cuddles – and then walked off with his boots.

For Ronaldinho, the love-in was small consolation for a defeat which could cost him a place in Brazil’s World Cup squad.

The 33-year-old scored Atletico’s goal but was off the pace and ponderous in a game in which he was hoping to impress Brazil coach Luiz Felipe Scolari. 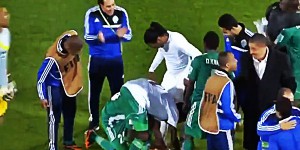 ‘Of course I’m dejected,’ he told Brazilian TV. ‘The expectations were huge, it’s been a marvelous year and we have gone down in the club’s history [winning the Copa Libertadores]. This is tough, we’ll have to see what’s left for us.’