Reports from Lilongwe were that the Malawi Electoral Commission (MEC) torched a storm when it told a National Election Consultative Forum on Friday that it had received assistance from ZEC. Some of the opposition parties walked out of the forum in protest.

However, an official from MEC said the Malawian electoral body had seconded a team to Zimbabwe to understudy ZEC.

In Harare, Justice Rita Makarau, ZEC chairperson, confirmed to a local paper that there has been collaboration between the two “sister election management bodies”.

“They (MEC) asked for assistance and we provided 8 000 gas lamps and a team from Malawi was in the country for training in election management,” Makarau said. “They have already left, you missed them unfortunately.”

She added: “The Malawian Electoral Commission also asked for our results management forms to see if they suit their election process. These are forms that are used for the transmission of results from different centres.”

Since the emergency of a credible opposition in Zimbabwe at the turn of the century, election processes in the country have been highly contested, mainly by the MDC-T led by Morgan Tsvangirai.

Malawians troop to the polls on May 20 for a tripartite election that could shape the future of the country.

The MEC in December announced it had registered 7,5 million people, representing 94% of Malawians eligible to vote. This number has been questioned by opposition parties as it appears to be bloated.

The ruling People’s Party (PP) secretary general, Paul Maulidi, confirmed there had been questions raised by some political parties over ZEC’s role in the Malawian elections.

“People are blowing a very small thing out of proportion. The MEC chairperson, Justice Mackson Mbendera, was briefing stakeholders on the progress thus far and he mentioned the assistance so far received from Zimbabwe.

“Some people then asked if it was only gas-lamps and tents they had received and the matter ended there,” said Maulidi.

Quizzed on whether Mbendera had disclosed that a team from Malawi had been trained in Zimbabwe, Maulidi was evasive.

“That is a question for the commission, I have told you the things they said they received and I cannot go any further than that,” Maulidi retorted.

Public condemnation of the way the ruling party led by Banda has been handling the electoral process has been growing, amid reports that Western donors threatened to withhold financial support for the crucial polls, the first since the sudden death of President Bingu wa Mutharika on April 5 2012.

Over the weekend, news has been spreading that the ruling party’s operatives have been getting voter certificates from people on the pretext that they want to use them for registering them into a fertilizer fund programme but have been making another copy of the certificates so that they use them for voting.[ 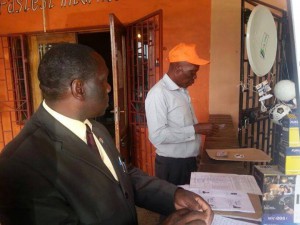 Caught on camera: PP functionaries caught with voter certificates having them scanned[/caption]